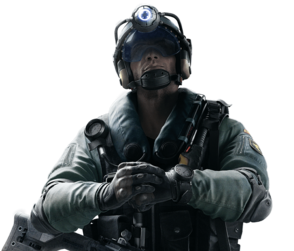 Pushed from one family to the next, Ryad emerged from the foster care system when his older brother, Faisal Ramírez, turned 18 and became his legal guardian. Blaming his shortcomings for the loss of his older brother, Ramírez decided to join the Policía Nacional. He passed the mandatory ESO (Secondary studies) and became a CNP (Cuerpo Nacional de Policía) at 19 years old. He is still investigating his brother's case to this day, but has been unable to find any solid evidence against his murderer. With strong resolve and broad resourcefulness in difficult terrains, Ramírez joined, the Grupo Especial de Operaciones (G.E.O.) to track down HVTs and intercept, narcotics shipments.

Suffers from chronic insomnia. Ramírez is at risk of developing acute symptoms such as muscular weariness, hallucinations, and/or double vision. He must be monitored closely.

Ramírez's insomnia results from the events that occurred on October 8th, 1985, Our experts have concluded that such trauma triggered an acute obsession with patterns in his immediate environment, in which he can detect impressive amounts of irregularities. It should be noted, however, that he is ill-equipped to cope with letting a target go free. He internalized the belief that he lost everything when he failed to follow the man who killed his brother.