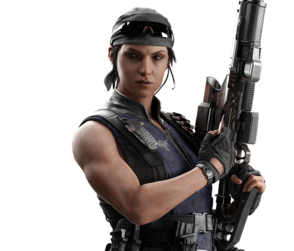 “Acceptance of mediocrity is the first step toward failure.”
Operator Information
Affiliation:

Acceptance of mediocrity is the first step toward failure.
Jaimini "Kali" Kalimohan Shah

Born to wealthy parents, Shah’s ability to achieve her goals was assured from an early age. This self-assurance hit a brick wall when she tried to join the military. Her interest in martial arts led her to enlist, but she quickly discovered that women weren’t allowed to serve in combat units. Despite all of her money and all of her social influence, she had found an obstacle between her and something she wanted, and it would not budge. Leaving the military, she created her own Private Security Company to operate within India’s borders, then a Private Military Company, NIGHTHAVEN, to operate overseas. She routinely negotiates multi-million-dollar contracts with incredibly favorable terms. Her ruthlessness is legendary, but by becoming a resource the Indian government desperately needs she has circumvented the laws that kept her from her goal and revalidated her self-perception as an unstoppable force in a largely static world.

Cultural similarity isn’t always a benefit when undertaking psychoanalysis. […] Despite our shared heritage, Specialist Jaimini Kalimohan “Kali” Shah’s experiences are as alien to me as if she had come from the dark side of the moon. Contrary to what the romantics of this world would have you believe, money does create a boundary that can’t be crossed by any other means. […]

As a child, Shah received everything she wanted, without effort or attention. She is both ambitious and arrogant, but not without merit. She excels as a leader, primarily by driving those under her command beyond their psychological and physical breaking points to “forge them anew.” The fact that those who complete her training are then inducted into an inner circle – a society of protectors, as she’s apt to call it – does little to separate her from notorious criminal overlords. And yet if I am consistent in believing that everyone has something to teach, I can’t discount her methods. […]

Does Shah have any sense of nationalistic pride? It’s difficult to say. To the ultra-rich, borders are merely suggestions. Yet her assumption of the name Kali and her ruthlessness toward those who cross her both imply a connection with the country of her ancestors. […] I suspect this lack of clarity with regards to her motivations is what has already put her at odds with Specialist Eliza “Ash” Cohen, but that was to be expected. Cohen is someone who lives by a very strict set of rules, and Shah’s very existence calls many of Cohen’s beliefs into question. […]

As for her strengths, they are many. She didn’t get to where she is by cruising on her family’s success. Her training regimen is relentless, augmented by the best trainers and the best equipment money can buy. She is brave – some would say foolhardy – and she is cunning. Put simply, she’s someone I would be loath to face off against, so it seemed prudent to invite her to join Rainbow. Friends and enemies being what they are, we may have need of her particular strategies far sooner than we would like to admit.

Finally, another honest piece of hardware makes its way into my hands. Figures we had to go to the other side of the world to find it.

Jaimini had to disable the biometrics before I could use the damn thing, but this LV-whatever-you-want is a beauty. The internal workings involve both percussive force and forward assist, which keep the shaft in place once it's embedded. The fuze leads to micro-explosives at the base and head of the round - HMTA at a guess.

(Comment Dr. H. Panday: I checked with Kali. There's nothing dangerous in her proprietary compound. Harry.)

(Comment E. Álvarez: I'll run my own tests, to make sure. I'll need her bacteriorhodopsin configuration, too. Mira.)

(Comment Dr. H. Panday: Her lawyers called. Please leave this part of the investigation aside for now. Harry.)

It's a neat little package that the IDF would love to get their hands on, if they weren't involved in its development. The explosion doesn't breach reinforcements, but it's got range. I'll be hard-pressed to beat it for utility, but beat it I shall.