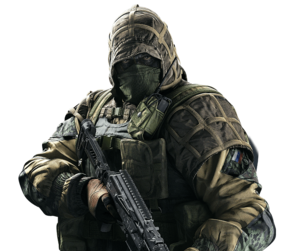 Maxim "Kapkan" Basuda (Born in Kovrov, May 14, 1979) is an defensive operator included in the original release of Rainbow Six Siege.

Born and raised in Kovrov, Basuda is the eldest of three sons to parents who were factory workers. Hoping to escape a grueling life in the factory, he enlisted, with the Ministry of Internal Affairs and was sent to Naryan Mar, a small sea and river port town on the Barents Sea. Basuda became an avid hunter and trapper during his time in the Arctic Circle, before being transferred to Beslan in 2002.

Basuda is a self-sufficient realist. He has seen the harsh reality of the world and does not allow that to hinder his ability to act. He's fascinated by psychology; what allows one creature to become a hunter and the other prey.

One of only a handful of officers to walk away from the Beslan School Siege. Extensive collection of weapons and survival gear. Designs/builds snares and traps as a hobby.