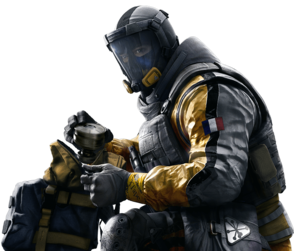 Olivier "Lion" Flament is an attacking operator featured in the Operation Chimera expansion for Rainbow Six Siege. At the Pro League Season 8 Finals, it was announced that Lion has been placed in a competitive quarantine, pending a future rework.

Olivier was born to a conservative, well-to-do family. His parents and older sister, Sophie, were in medicine and devout Catholics, but he bucked against their accomplishments and their faith. He was smart and arrogant, but he believed rebellion was a better use of his intellect. It was fun to act against expectation, to drink and party... at least it was until he got his girlfriend, Claire, pregnant.

He tried to convince Claire to get an abortion, but she refused. Once his parents found out about the pregnancy, they kicked him out of the house; it was the last straw in a string of bad behavior. Depressed, Olivier went on a drug and alcohol fueled bender, getting trashed enough to land in the hospital. That was his wakeup call. He was 18 and nearly homeless, so he joined the French Army out of desperation. He needed purpose.

Military life was hard but rewarding. Olivier took solace in purpose and struggled, to break old habits. He started sending money to Claire to support their newborn son even though she did not want to see Olivier. He became a second-level in-combat rescuer, and joined the 2nd Dragoon Regiment in their role as a CBRN, reaction force. He also developed a close relationship with the regiment's Catholic Chaplain, Bertrand, who eventually spoke to Claire and convinced her that Olivier regretted his actions. He arranged a reunion for them.

It was a hard moment for Olivier. He met his son, Alexis, the child he wanted aborted, and the reality of his decision hit him hard. He had been selfish, pushing, his girlfriend to do something because it inconvenienced him. More so, Claire was about to get married and Alexis was already calling someone else 'daddy.' Everything he had done, putting his loved ones through hell, shoved him into a wild depression that almost cost him his rank. Chaplain Bertrand helped Olivier through his crisis and with it, he returned to the Catholic Church.

Olivier swore he would do everything possible to rectify the pain he had caused, so he worked harder, and sought more challenges. He qualified to join the Groupe d'intervention de la Gendarmerie nationale (GIGN) as their new biohazard expert, using drones to maintain and hold quarantine perimeters. He focused on his duty, on making things right, no matter how much it hurt him in the process. His feelings were irrelevant; what mattered was strict observation of his duty. During | a Yellow Fever outbreak in Sudan, while protecting a field investigation team, his | loud voice scared a frightened mob back and he gained the nickname "Lion" from the locals.

In 2015, the army asked him to lead the 2nd Dragoons to West Africa to assist medical personnel fighting the Ebola epidemic. Tragedy ensued, and the decisions Olivier made for safety reasons put him at odds with Doc, who blamed him for the death of several medical personnel on-site including Doc's colleague. The tension between the two continues to this day in Team Rainbow.

After studying his jacket, Finka recommended Olivier for Rainbow as a CBRN, specialist, and Six agreed. Olivier immediately proved his value when Finka and he uncovered the source of the mysterious mist that came ashore in Sussex and, poisoned people, though he claims he shares that success with Twitch, who provided him with the new aerial drone to locate the mist plume.

Olivier has managed to stay in his son's life, but it is an awkward relationship. Alexis does not know how to call him father and Olivier is not sure what it means to be a dad in the day-to-day. He has mended bridges with his parents and, sister, his return to the Catholic faith healing those wounds, and while his decision to be a soldier bothers them, he is no longer the thoughtless rebel. He is not a soldier to make life easy on his soul. He bears the weight of responsibility for what he has done even though Bertrand constantly reminds him that forgiveness is in the heart of God.

Lion is a by-the-books Operator because he doesn't trust his civilian instincts. Rules give him structure and allow him to control what he considers the pettier parts of his personality. They give him a safety net when conscience or arrogance could otherwise weaken his resolve and hurt more lives. He bears the weight of responsibility for what he has done and pushes himself to the limits as a form of corporal punishment. Unfortunately, he is arrogant and has rubbed some people, within GIGN and Rainbow the wrong way. Doc thinks he lacks the empathy necessary to help in medical crises while Lion thinks Doc's humanitarianism is a liability. Twitch is not happy about being caught in the middle of that fight. His closest friend in GIGN is Montagne, but when Thatcher punched him after he said the wrong thing during a training exercise, Lion almost brought the GIGN and SAS to blows.

Olivier spends most of his social time at Church volunteering when he can, or at his apartment reading and staying out of trouble while listening to the angry albums of his teenage years.