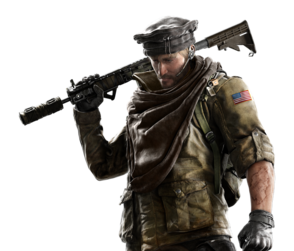 “The Devil’s in the details… that’s where you’ll find me.”
Operator Information
Affiliation:

"The Devil's in the details... that's where you'll find me."

Bostonian Erik Thorn came from a multilingual home and ranked in the top 2% in intelligence. After high school, he enlisted with the U.S. Army and rose in rank over a short period of time. He learned Dari and became an Intelligence Officer, serving in Kabul as foreign reporters, adventurers, and criminals flocked to the city. Thorn was well known in the underground club circuit, and even among locals as a proficient Buzkashi player.

Thorn was invited into the Unit as their regional specialist. Following selection, he remained in country, gathering intel, building networks of allies and safe houses, and tracking hostiles. As the situation in Kabul worsened, Thorn kept tabs on Americans, rescuing them when necessary and helping locals escape the violence He was investigating a missing reporter when The Unit lost contact with him. After two years of silence, he re-emerged with enough intel to dismantle a major insurgency operation. There were still questions regarding his disappearance, but he was exonerated and his testimony sealed. His successful missions, along with his expertise, gained him the attention of Six.

I knew Specialist Erik "Maverick" Thorn well before his disappearance. He was a legend among Intelligence Collectors as the spook who "went native". He's often difficult to engage with since he's incredibly intelligent and able to read others with remarkable intensity, but ask him about Kabul or Buzkashi and he can barely contain his excitement. [...]

I've never seen old men sell their services on street corners to write love letters before, so it's hardly surprising he took to Afghanistan... it's a bewitching culture. When expats began partying in underground clubs and drinking at restaurants, Specialist Thorn admitted that he knew the "Kabubble" was going to pop hard, that Westerners would be easy targets. He saw the writing on the wall before anyone else did. [...]

From a young age, Specialist Thorn handled an almost overwhelming amount of sensory input that would have shut down most kids. Instead, he compartmentalized and deconstructed everything around him as a way to function. It's one reason I think he internalizes his emotions. [...] His parents were loving but rigid-they barely let him explore his own neighborhood. It's what drove him to join the army, to experience a world he could only dream about. It's hardly surprising Kabul left such a heavy imprint on him. I don't think he emerged from his shell until he started traveling, and even now his mind is with us, but his heart is in Kabul.[...]

Specialist Thorn has displayed remarkable empathy stemming from his ability to watch, listen and dissect. People confide in him and it's why he survived in Kabul as a fly on the wall. [...] I'm still going through debriefs regarding his disappearance. It reads like a terrifying thriller but the scars that came with his experience have only tied him more closely to Afghanistan. I think his tattoo is a reminder of that life.

"TII admit that not as much work was put into Specialist Thorn's Torch as the Brimstone. He already had a fully functioning prototype that essentially did what it's supposed to do, albeit a shoddy, poor man's version. I gotta say though, it's amazing that he was able to even build the V1 Torch with such basic tools. Specialist Cohen and I are experts at breaching (and entering), but SWAT designed the M120 and Brimstone to raid the enemy and have the blast take them by surprise. When we were presented with "Suri", as Thorn likes to call it, we knew its most crucial aspect was the low volume sound. The challenge was retaining that quality but intensifying and accelerating the heat, since the rate at which the prototype's flame was streaming would take hours to pierce through Adding acetylene and some propane into the mix seemed to do the trick, and we got one hell of a torch. Thorn insisted that we incorporate that tank he brought back with him from Afghanistan, which he claims has been with him since the beginning', whatever that means."