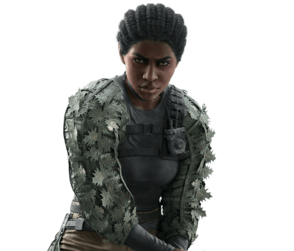 “"Understanding is the only tool that vanquishes ignorance.”
Operator Information
Affiliation:

Thandiwe "Melusi" Ndlovu (born in Louwsburg, June 16, 1987) is an defending operator featured in the Operation Steel Wave expansion for Rainbow Six Siege. Due to the introduction of an evaluation period in Operation Shifting Tides, both Melusi and Ace are unavailable in competitive play for the duration of Operation Steel Wave. [1]

Born in the small town of Louwsburg near the Ithala Game Reserve, Ndlovu spent many years exploring with her friend, Elna Gardiner. As they grew, so did their appreciation of and sense of responsibility for the animals on the reserve. The threat from poachers fueled their determination, and though haunted they focused on the lives they could save, rather than past casualties.

Ndlovu signed up with the South African National Defence Force to broaden her skillset and fund her field ranger training. Her persistence and dedication brought her to the attention of the 1 Parachute Battalion, until an ambush in the Central African Republic left her badly wounded.

When Gardiner, who had become an accomplished veterinarian, asked for help defending Hluhluwe–Imfolozi Park, Ndlovu resigned from the military and began training local women in tracking, interception, and surveillance. Together, they are the heart of the Inkaba Task Force Anti-Poaching Unit.

Specialist Thandiwe “Melusi” Ndlovu strikes me as someone uniquely suited to carrying out South Africa’s ongoing conservation efforts – she is efficient, precise, and accepts that greed remains one of humanity’s greatest challenges. When I asked if she thought we would ever be rid of it, she smiled and said, “It’s good to dream, Doctor.” […]

Her relationship with Elna began the day they discovered that their names meant the same thing: “beloved”. It wasn’t always an easy friendship, but their shared adoration for the animals of the game reserve and propensity for exploring where they absolutely should not have been saw them through a lot of challenges. […] Ndlovu's stoic comparison between the wounded of the battlefield and the cries of poisoned elephants is in stark contrast to Elna’s compassion. It’s interesting that one focused on prevention, and the other on triage. In the end, their divergent paths create a complementary partnership. […]

Ndlovu refuses to speak about the ambush that decimated her unit. From the reports it’s clear the operation was a harrowing ordeal from which she was lucky to escape. I tried approaching the topic from the angle of latent survivor’s guilt, but she brushed off my attempts. She seems more affected by the tragedies she witnessed on the reserve – comparing land mines to snares, and mentally turning the the reserve into a warzone. […] Her profile indicates that any negative feelings have been transmuted into action, in the forms of training the women of her anti-poaching unit and the web of drone-based surveillance she has organized to oversee their operations.

On the topic of her work, she is effusive. Ndlovu believes strongly that there must be education and a shared responsibility within the community, that simply fighting poachers is not enough. She takes great pride in the accomplishments of the women under her command, and in their contribution to the well-being of the animals they protect. She cares, too, about improving the local economy, but this concern is secondary to providing what she calls “self-directed futures” – believing that these, above everything, will counter the lure of easy money.