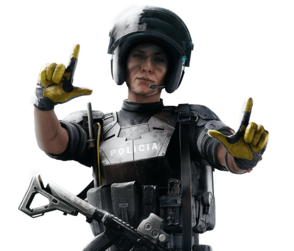 Working alongside her father in his mechanics store from a young age, Álvarez can find the weaker spot on any machinery and turn it into an edge. She joined the police force Cuerpo Nacional de Policía so that she could be of service to those in need, and thus serve her country.

Proving to have stellar endurance and an extensive knowledge of vehicles, she entered the ballistic field. Among the Grupo Especial de Operaciones (G.E.O.), she developed new bulletproof materials and enhanced bridging vehicles.

Abandoned by her mother at birth, she was raised by her father in Madrid. Being an only child, she found her purpose working the family business.

Following Operation Blue Orion, the two Operators Eliza Cohen and Álvarez have been persistent rivals. Further investigation is required to assess if such tension could become a risk in future cooperative missions.