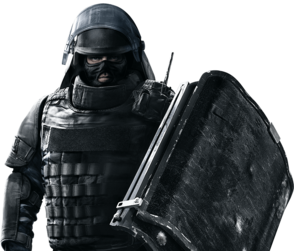 Gilles "Montagne" Touré (Born in Bordeaux, October 11, 1968) is an attacking operator included in the original release of Rainbow Six Siege.

The son of an army officer and a school teacher, the family was stationed near Bordeaux. A few years after Touré graduated from high school, he became a member of the National Gendarmerie. As a police officer, Touré has dedicated his life to the defense work. His devotion and commitment to the ideals of the National Gendarmerie allowed him to obtain a position within the GIGN.

Touré is considered highly dependable by his peers. His steady nerves have, allowed him to successfully take control of complex, high stress situations during the tenure of his career. As a trainer, Touré is stern with the new recruits but always tries to remain fair. He prefers to lead by example.