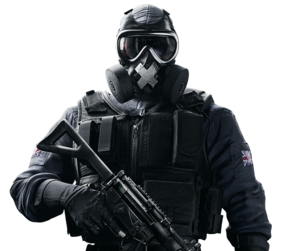 Mark "Mute" Chander (Born in York, October 11, 1991) is an defensive operator included in the original release of Rainbow Six Siege.

Chandar graduated from secondary school at the age of twelve. A science, prodigy, he was accepted into the University of Cambridge, Department of Engineering at fourteen after completing an internship at a British tech company during his gap year, working on prototypes for a new security system.

Chandar is highly intelligent and analytical. He is used to being the youngest and, smartest one in the room. A man of few words, he prefers brevity and clarity to extemporizing. His curt nature is easily misconstrued as rudeness.