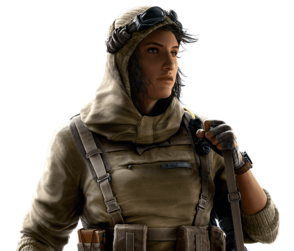 “Deep down in my veins, I knew I had to travel. Now that I have, I’m certain I haven’t traveled enough.”
Operator Information
Affiliation:

Brought up in a wealthy Moroccan family, Sanaa El Maktoub travelled considerably at a young age, visiting Europe and North Africa, and dreaming about braving remote regions. She enlisted in the military at 19 and later joined the Groupe d'Intérvention de La Gendarmerie Royale (GIGR) after graduating from the legendary Fortress. She served 4 tours with the Mountain Infantry Battalion and took part in Flintlock exercises and joint missions with Trans-Saharan Counterterrorism Initiative partners. She became her unit’s expert on environmental operations.

Between tours, she undertakes solo expeditions. El Maktoub is among the few explorers who can cross the Sahara, climb up the Alps, trek through Asia’s rainforests, march along the Arctic Circle… and still return to her unit in operational shape. Rain or shine, desert or polar climates, she can walk through it all. Perceptive and resourceful, she’s an expert survivalist who sketches out her trips in her notebook.

Specialist Sanaa El Maktoub is constantly on the move, thus her codename, “Nomad.” The only time she stands still is when she’s sketching in her notebook, and following the recovery of her fingers no less. […] I think her privileged upbringing instilled her with a private need to succeed, pushing her to conquer mountains and terrains her parents never faced. She likely got accused of being soft in her childhood, and she’s set out ever since to disprove it. In her it’s created a world-class extreme environment expert whose reputation precedes her. […]

I can see why she’s invaluable to GIGR. She claims that anyone can develop her survivalist and planning skills with experience, but she’s being genuinely modest. Bragging seems antithetical to her and I think that it somehow diminishes her own sense of accomplishment when she has to talk about it. She certainly doesn’t do things the easy way… her drawing are her photographs. Truth be told, I’m envious of her spirit. […]

First deployed to the Fortress at the start of her military career, she did extensive training under the leadership of Specialist Jalal El Fassi. It would be interesting to see them working together again under different circumstances. […]

During her expeditions, she encountered a number of secluded cultures, like the Maasai in Kenya and the Nenets of Siberia. It’s resulted in self-taught skills in cultural diplomacy. While Rainbow Six recruits specialists from around the world, I’d guess no one else has seen as much of the world on their own as she has. And still, she wants to become the first woman to cross Antarctica, alone on foot. I have no doubt she can accomplish that, but I hope it doesn’t cost her more appendages. I privately worry that she considers such injuries a badge of honor and proof that she isn’t some spoiled rich girl.

"Several Operators have grown accustomed to calling Nomad's grenades as “Air Jabs.” Zofia coined that term. Nomad doesn't seem to mind, saying “Ça m'est égal." […] Once it's launched from the custom rifle attachment, the repulsion grenade can explode midair when in close proximity to an enemy. It can also stick to a wall and explode later, again when an enemy is within range. Its dual functionality makes it adaptable to many situations. […] The proprietary adhesive compound or “goo" allows the grenade's body to stick to any surface. These Air Jabs are non-lethal but they still pack a punch, pushing back and disorienting enemies who get caught in the blast radius.

[…] Nomad had the idea for the modified launcher and the repulsion grenades following one of her expeditions. She prototyped the attachment herself until Mr. El Maktoub, Nomad's father and former governor, was able to pull some strings and get some of the country's researchers and engineers to work on the adhesive compound and repulsion technology. The non-lethal aspect of this gadget allows for a wide range of applications, even outside of the military, but Nomad remains the sole user of these Air Jabs as the grenades themselves are too expensive to mass-produce. […] I didn't think a launcher this compact could shoot grenades that release that much pressure. However, I wouldn't compare them to my M 120 CREM or my breaching rounds; each of our gadgets serve a different purpose."