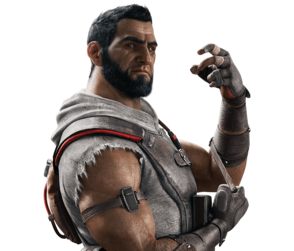 “Sometimes, the only way out is through.”
Operator Information
Affiliation:
Unaffiliated
Team:

Little is known about Al Hadid’s life. He grew up in a small town adjacent to an air force base, and by all accounts had a normal childhood up until he disappeared from international records for more than fifteen years. He eventually resurfaced in Jordan, but stayed only long enough to obtain a new passport. He learned wrestling in Istanbul, Muay Thai in Bangkok, tactical driving in Berlin, and precision marksmanship in Damascus, likely working for a paramilitary sponsor. Then he disappeared again.

He next showed up as a cadet at Jalal “Kaid” El Fassi’s Fortress. As the years passed, his role evolved, from recruit to steward to instructor. Now the unofficial second-in-command, Al Hadid maintains the Fortress during Kaid’s absences and acts as a trusted advisor whenever the two of them are together.

Rumors of Al Hadid’s ferocity abound, but remain uncorroborated by field reports and should be disregarded.

Saif “Oryx” Al Hadid has lived an exceptional life. Torn from his family as a teenager, he was outside of Jordan – he won’t say where – when he was incarcerated. For over fifteen years he struggled for his freedom, moving between solitary confinement and different facilities. The rage he bears as a result of this inhumane treatment is something I have witnessed once, and hope to never see again. […]

My first meeting with Al Hadid took place not in my own office, but in the well-appointed private sanctuary of Jalal “Kaid” El Fassi. He had told me stories of the warrior forged from raw iron, of his outstanding strength and resilience, but also of the weeks during which the man had sat, unmoving, in the scorching desert heat, waiting for Kaid to open the Fortress’ doors. […] Though no outward mark remains of his transformation, it is clear Al Hadid is a man thoroughly changed.

We spoke of the ubiquitous cats of Morocco, of his trek, on foot, from Syria to the Atlas Mountains, and of poetry, for which he has a special fondness. […] Despite his scars, Al Hadid does not dwell in the past. There is nothing for him there, he said. I wondered if his stoicism hid some deeper longing, but in our sessions since I have found no such indication. […]

Al Hadid’s phenomenal self-control puts my own efforts at mastery to shame. Even Specialist Yumiko “Hibana” Imagawa has commented on the utter calm he exudes. The difference between them is that he allows his control to waver at selected moments, in service of his larger goals. He has turned a crippling affliction into overwhelming strength. This is an extraordinary skill that I have encouraged him to share, when and where he will. […]

Other operators are making inroads with Al Hadid, but progress is slow. I suspect, like many subjected to the depths of human cruelty, trusting others will not come naturally. Disquieting though it is to admit, Rainbow may be the one place where he is amongst those who can best understand his past.