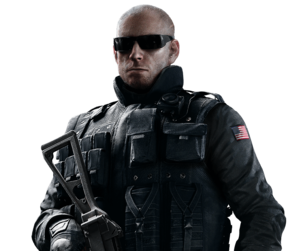 Jack "Pulse" Estrada (Born in Goldsboro, October 11, 1984) is an defensive operator included in the original release of Rainbow Six Siege.

Born to Cynthia Estrada and Mark Peterson on the Seymour Johnson Air Force Base, Jack was raised a military brat. Following in his mother's footsteps, Jack became an intelligence officer.

As a result of the constant relocation from base to base, Jack was fascinated by the microscopic variances that comprise identity. He became an adept at recognizing micro expressions and delineating a person's history based upon speech patterns and physicality.

In 2007, Jack became an intern for the FBI biometrics program. Moving from the lab to active duty in 2010, where Jack was invited to join the FBI SWAT team. His innate ability to read people made him a natural negotiator.