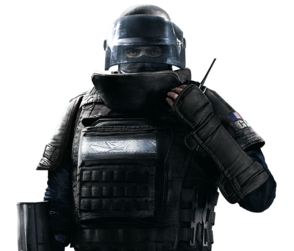 Julien "Rook" Nizan is an defensive operator included in the original release of Rainbow Six Siege.

In school, Nizan excelled in athletics, specifically in Track and Field. The youngest, son of a working class family, he enlisted with the Gendarmerie Nationale at eighteen and found himself assigned to the Highway Patrol unit. During basic training, Nizan discovered his aptitude for firearms, a skill that he would continue to develop and master during his time with the Gendarmerie Nationale. Nizan's skill with a rifle attracted the attention of the GIGN.

Nizan is idealistic and trusting. He can be impulsive, and must self-regulate in order to remain on task. When his focus is clear, he is decisive and driven to complete the task at hand.

Performs trust exercises with all the new recruits. Fluent in English, studied with an American Professor at Secondary School.