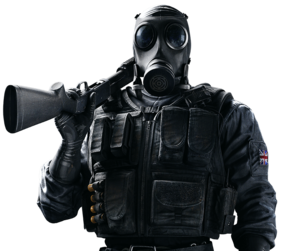 James "Smoke" Porter (Born in London, May 14, 1981) is an defensive operator included in the original release of Rainbow Six Siege.

Porter was not an academic, although in secondary school he excelled in science. He took a particular interest in biology and the unit on dissection. During his gap year, Porter enlisted in the British Army, using a fake ID to circumvent parental consent.

Porter is a thrill seeker with very little regard for his personal safety. He is fearless in battle and can be a great asset for defensive maneuvers. However, he seems to enjoy the havoc and chaos of war. He tends to have an odd sense of humor in stressful situations. Can be narcissistic.

After basic training, Porter was stationed in Belfast. Finding the posting a bit dull, in the wake of the March 2007 treaty, he joined the Army Boxing Team as a middleweight.