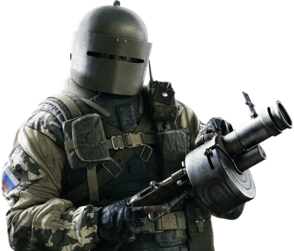 “They told me I’d died. They were wrong. I was reborn.”

Many of the men in the Senaviev family served in the Red Army. At the age of eighteen, Senaviev was conscripted into military service just as the Soviet Union was ending its operations in Afghanistan. Upon the dissolution of his draft, Senaviev opted to enlist full time. He was part of the wrestling league, where his formidable frame and match strategy earned him accolades. Along with heavy artillery, Senaviev's training focused on defensive and breaching tactics, and while there he apprenticed as a precision tool and die machinist in the weapons division. Senaviev applied for a transfer to the Russian Navy but for classified reasons remained in the Armed Forces.

Calm in a crisis: Specialist Alexsandr “Tachanka” Senaviev's original file doesn’t cover much more than that. So along with our meeting, I wanted to dig deeper into field reports and observe him in training before I could reassess his background.

Senaviev has a boisterous sense of humor with a booming laugh. He can be quite blunt, but without the intent to offend. Personally, I appreciate someone with clarity. […] He’s dedicated to his team and is focused and calm during operations. That said, I’ve also observed some frustration. There’s a contingent of specialists who passionately support him, yet Senaviev feels he has potential that he doesn’t know how to maximize. It’s clear he wants to be a devastating force so I suggested changing his approach. If he studies his team, in particular, he should search for gaps in their strategy. It’s there he may just find a place where he fits. […]

Senaviev's younger sister is a doctor and our discussion had barely started when he was showing me pictures of her in her doctor’s smock, along with a dozen more photos of his nieces and nephews and his own kids. […] He and his sister grew up in a strict household without many things, which is why he makes a great effort to enjoy life. They both make sure that their kids are loved and raised with laughter. At the same time, he doesn’t like to buy or accumulate physical objects and emphasizes this with his children, much to their consternation. I suspect that’s also partly to do with his divorce. […]

Though Senaviev is dedicated to his country and appreciates the life his patriotism has brought him, he was adamant that his son and his nephew not make a career out of the military. “They can do the obligation,” he told me. “Then go be useful in something else.” And so what Senaviev wants for his family and friends – for them to find a role where they feel useful – is what he’s trying to find for himself. It’s up to Rainbow, as a team, to guide him.

A collector of Soviet-era weaponry, he prefers simple designs proven to be effective, over the modern experimental technology and warfare.