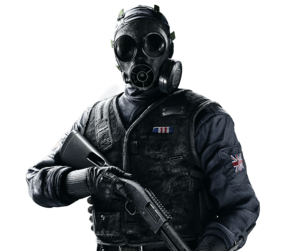 Mike "Thatcher" Baker (Born in Bideford, June 22, 1961) is an attacking operator included in the original release of Rainbow Six Siege.

What you can feel, what you can touch - those are the things that are real. Everything else is just a distraction.
Mike "Thatcher" Baker

Baker comes from a long line of dockworkers and soldiers. At the age of eighteen he enlisted for active military duty despite family pressure to join the family trade as a stevedore. Immediately thrown into politically-charged conflicts, Baker's performance was exemplary. Further training and another conflict gave him a Distinguished Flying Cross and Conspicuous Gallantry Cross. His keen sense of observation and decisive manner, combined with his close-quarter combat techniques, made him invaluable on VIP protection detail.

With extensive field experience and proficienct in SAS tatics, Baker is a critical asset to any Rainbow operation. He has honed his expertise with protective measures and electronic counter-measures and frequently works with engineers to advance the equipment. As a Warrant Officer Class 1 (Regimental Sergant Major) Baker serves as a respected and effective mentor to new recruits. Baker maintains his agility training, continuing abseiling, and has broken numerous mountain climbing records.

Knowing that Specialist Mike "Thatcher" Baker is cynical toward bureaucracy, I wasn't surprised that he was reluctant to meet me. I needed a different approach. Baker lives aboard the Iron Maggie, a boat in drydock that he repairs in his spare time. It's his "retirement plan." I suspect he moved there temporarily when his wife divorced him, be now he knows no other civilian home. […]

Baker has a distinguished record of military service. He's respected and in some cases idolized by those he mentors. When he welcomed me to his home, I could see why people describe him as down-to-earth. There's more to Baker's gruff, no-nonsense exterior - it just required some effort for him to trust me. […]

Raised in a coastal town, Baker has a strong connection with the water. We spent our entire meeting on the deck of his ship, overlooking the cold sea. Being someone who isn't handy - mastering a paper airplane as a kid was the peak of my craft - I wanted to know what Baker likes about boat building and working with his hands. He told me that besides appreciating the precision of it, he liked shaping the wood into something that has purpose. I suggested it was similar to how he mentors recruits. He replied that he doesn't care about the "why" of things the us "Uni types" do. […]

Specialist Seamus "Sledge" Cowden is one of his few close friends. Baker's tolerance of Specialist Mark "Mute" Chandar surprised me, since Baker is impatient with youthful bluster. When asked, Baker would only say, "Mute's a clever kid." He sounded almost envious. I wonder if Mute reflects someone Baker wishes he had been. […]

While by no means a Luddite, Baker does have an aversion to technology. To him, it's a tool - like a hammer or screwdriver - nothing more. The idea that people come to rely on it as a crutch is what annoys him. I suggested that he spend time in the engineering lab with Specialists Masaru "Echo" Enatsu and Emmanuelle "Twitch" Pichon. They have a lot to teach one another.


One of the biggest challenges for a team is Specialist Mike "Thatcher" Baker's EG MKO-EMP grenade since the electromagnetic surge can disable electronic gadgets within its radius. The EG MKO-EMP disrupts - in some cases it can destroy - quite a few of our devices. It locks up my Cardiac Sensor as it can't detect another pulse!

The EMP is deceptively simple. It's the grenade's impact that charges the electron particles. That concentrated energy cascades across an area - even through walls - and spike nearby electronics. Short of wrapping ourselves in a Faraday shield to protect our devices, there isn't much that we can do against that.

Despite how... exhausting Thatcher's "I told ya so" can be, I appreciate how the EG MKO-EMP is an extension of his personality. The same could be said about each of use, but Thatcher really owns it, man. It's as straightforward and direct as he is and keeps us on our toes... and he loves every damn minute of it.