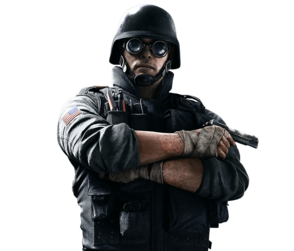 Jordan "Thermite" Trace (Born in Plano, March 14, 1982) is an attacking operator included in the original release of Rainbow Six Siege.

Race joined the Marines after high school, serving two tours in Iraq. After his discharge he used his GI Bill money to put himself through college at Texas A&M and earned a Bachelor of Science in Chemistry. He then joined the FBI. After four years as a field agent he transferred to FBI SWAT.

Regimented, disciplined, orderly, these are some of the words people use to describe Trace. He knows when to relax, especially in social situations. He takes pride in knowing all of the variables. Trace prefers to be the one in control rather than leave things to chance.