For The German Caster, see ThoreBnB. 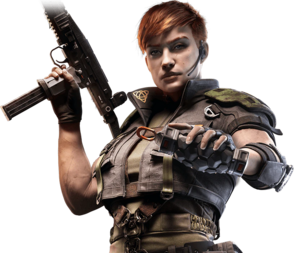 There’s a lot to be said about specialist Brianna “Thorn” Skehan, considering I’ve known her for quite some time. We haven’t been in contact in a while, but her right hook leaves a lasting impression that I won’t soon forget.

She’s a dedicated woman, stubborn, doesn’t take anyone’s rubbish. She’s a good choice for a recruit – you’d have trouble finding another soldier as strong or as smart. Her infamous obstacle course represents her perfectly in that sense, and you said it yourself – that thing’s as hard as it gets.

We have a solid team, but Brianna’s bound to round it out perfectly. You never have to worry about her being on top of her game, and if we’re lucky, she’ll kick a few of us in the backside for motivation. When she’s not so guarded, she’s forthcoming with her time and she’ll help anyone who she feels needs it.

On that subject – she treats people about as well as they treat her. She’s got a smile and a hug for her pals, and nothing but aches and pains for anyone who messes with her or what she stands for. Her four brothers always gave her a rough time, so don’t be surprised at how common the word “bully” is in her vocabulary.

I’ll spare you the stories, she can tell you those herself if she wants to. She’s already told Mira, judging from that insane contraption she designed for her. Territorial is one way to put it – walking into its warning zone is like a cactus kindly telling you that you’re about to step on it barefoot. It’s no less terrifying, but at least you get to adjust. It’s sharp, bright, and beautifully crafted.

With the Six Invitational (Stadium) coming up, I’m sure Brianna will fit right in and maybe even push our team to victory. The others will have to double their efforts just to keep up with us, and I certainly won’t complain about that. I’ll see you both in training.

“Pick on someone your own size.”

Thorn grew up on a farm in a part of Ireland known for two things: horse racing and military training. For several generations her family was heavily involved with both. When she wasn’t outwrestling one of her five older brothers, she was helping her parents breed and raise thoroughbreds for the tracks as well as for the mounted division of Ireland’s national police force. It’s a Hawthorn family tradition to eventually abandon farm life for the military, as it’s considered to be “easier”. Thorn, however chose to follow the horses and joined the Garda Síochána.

After four years of impeccable service she applied for the Garda’s elite tactical branch, the Emergency Response Unit. Only five percent of applicants pass the grueling two-week entrance exam. Thorn not only finished top of her class, but would routinely assist other applicants through the training gauntlet.

She quickly rose through the ranks as a tactical weapons expert and helped re-design the unit’s obstacle course, referring to the former design as a “walk in the park.” Word of her course reached the ears of Caveira, who upon barely completing the training exclaimed with exhaustion “You want a job?”

"If ever you want to feel physically inept, shake hands with a farmer. At least that’s how I felt when I first met Specialist Brianna “Thorn” Skehan. In that brief instant I experienced a life’s worth of hard work, discipline, tremendous strength, and total control. I knew then and there she’d fit right in.

Growing up on the farm, Brianna had to fight for attention, and everything else. Her mother and father were too busy and left most of the parenting to her older brothers. And while she may have been picked on when she was little, it all stopped the day she broke her oldest brother’s nose. She possesses a strong sense of justice and has zero tolerance for bullying […]

When we discussed her decision to join the police force, she recounted with some reservation an incident involving her youngest brother, Liam. His many addictions led him to the racetracks, where he fell into the pockets of organized crime members. One night he led them onto the farm where they burned a stable to the ground, killing the champion horses inside. Brianna joined An Garda Síochána the very next day, and never saw Liam again.

[…] Brianna often glosses over hard topics with humor and is quick to suppress her emotions. Signs of vulnerability were weaknesses in the eyes of her brothers, which would explain her perfectionism, her competitiveness, and her ferociousness on the field.

Brianna’s personality is magnetic. She gets along with everyone and elevates morale with her stories. She’s awake and training before most of our specialists have opened their eyes, although Sledge has recently been joining her on morning jogs. […] When I asked if her past was a distraction, she laughed and said “Only fools get distracted by the past.” I was tempted to explain how I’d be out of a job if that were the case.

(Comment_E. Álvarez: "When Brianna told me how she used to defend her food from the greedy hands of her brothers with a table fork, I was immediately inspired. I wanted to design something severely punishing to anyone foolish enough to encroach on her space. But to have maximum effectiveness in the field it had to be throwable, proximity-activated, and time-sensitive. The trick was incorporating high-velocity, multi-directional projectiles in a dormant shell." - Mira)

I was a little nervous when Mira said her inspiration for the Razorbloom Shell came from one of my childhood stories. I though maybe she was going to hand me a cattle prod or some sort of fancy shovel. Needless to say I was pleasantly suprised.

From the moment I pulled the pin, I was in love. Grenades are unpredictable and can be thrown back in your face. But the Razorbloom's deployable claws can grip just about any surface. So once the proximity sensor is activated and the device turns red (like me when I'm angry) you'd better keep moving forward or retreat altogether. Because trust me, you don't want to get caught in the blast radius when that thing unleashes what I like to call "controlled chaos".