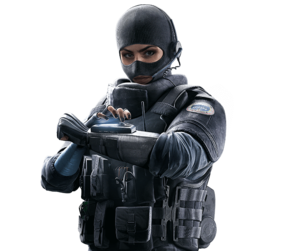 Emmanuelle "Twitch" Pichon (Born in Nancy, October 12, 1988) is an attacking operator included in the original release of Rainbow Six Siege.

Born into the town of Nancy, Pichon grew up in a family that valued education, particularly math and science. Early participation in sponsored computer programming competitions led to her joining army cadets at sixteeen.

Pichon demonstrates an affinity for complex robotic systems and mechanical processes, due to an early exposure to analytical problem solving. This ability transcends academia. Unlike many engineers who have a propensity to be emotionally disconnected or apathetic, Pichon is strongly intuitive and empathetic. She believes that technology's best use is to improve quality of life. The principle motivates Pichon in her military service.

Despite her young age, Pichon shows exemplary promise as a support specialist. At twenty years old, she was the youngest operative to ever be accepted into the GIGN.