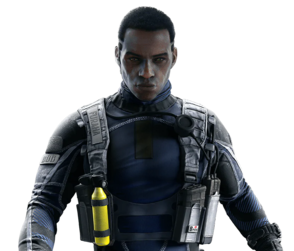 “The closer you are to death, the more vibrant life becomes.”
Operator Information
Affiliation:

Born to a fishing family on the coast of Kenya, Furaha spent his childhood hunting sharks and collecting lost treasures from the ocean floor of the Lamu Archipelago. It soon became apparent that he was able to stay underwater far longer than his peers, and medical exploration revealed an abnormal physiology that contributed to Furaha’s long-held belief that he was “not from here.” When the opportunity arose to join the Kenyan Navy, and later the Kenya Special Boat Unit, he put his skills to good use. He quickly drew the attention of generals within the navy as well as the worldwide scientific community for his prolific and frequent record-breaking freedives. He later transitioned to NIGHTHAVEN, drawn by the promise of more down-time and a private boat to take him to where his next dive site might be.

Talking to Specialist Ngũgĩ Muchoki “Wamai” Furaha is like talking underwater. Words are exchanged, but it’s not certain that meaning follows. […] Surprisingly, I find myself refreshed by our exchanges. There’s a purity that comes with free association, with being able to jump from one abstract concept to the next. Furaha senses, too, when other people are likely to get lost – at the moments where I find myself most without an anchor, his quick smile and change of topic reassures me that we have not gone beyond all human thought, never to return. […] It makes me question whether I should be more flexible in my thought processes, followed quickly by wondering, if I were, who I would become. […]

The existential questions raised by someone who spends their free time anoxic are not those we ask ourselves often. And, perhaps deprived of Furaha’s particular sensitivity to these topics, I’m not certain I see value in them. His unaccustomed approach results in strategies that are completely alien. Furaha’s ability to conceptualize 3D space in not just the horizontal but the vertical is something I’ve only seen in the most obsessive of pilots. Yet his internal dimension is surprisingly absent. […]

I once spoke with a renowned monk who had spent his life in pursuit of “complete zero.” In him, I saw the same depth of being I see now in Furaha, but where many people’s spirituality serves to shore up those parts of their personality that they most admire, theirs is the inverse. Furaha’s life is in service to his spirituality. Anoxia is part of his addiction. […]

In all of my consultations, I strive for neutrality. Furaha is a talented operator, capable, intelligent, and unpredictable. His ability to put a room at ease is invaluable. Yet one never has the sense that they hold the whole picture of him in their mind. Like the nitrogen that must disperse back into the diver’s body before resurfacing, Furaha’s true nature is diffuse. To define him would be to limit him, and I have the distinct sense that there is nothing he would despise more.