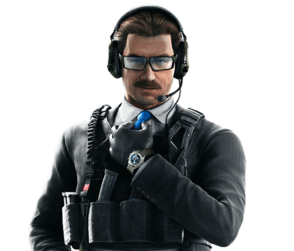 Collinn "Warden" McKinley (born in Louisville, March 18, 1971) is a defending operator featured in the Operation Phantom Sight expansion for Rainbow Six Siege. Due to the introduction of an evaluation period in Operation Wind Bastion, both Warden and Nøkk are unavailable in competitive play for the duration of Operation Phantom Sight. [1]

Collinn McKinley enrolled in the Marine Corps at 18 and earned several commendations in his service jacket for his aggressive quick-thinking, achieving Master Sergeant despite a few minor infractions on his record. After his third tour, he left the Marines and entered the Secret Service in close-protection detail. McKinley’s agility was instrumental in saving Secretary of State Baldwin’s life when insurgents attacked the U.S. diplomatic junket. Baldwin later went on to win the U.S. Presidential and requested McKinley be assigned to the Presidential Protective Division. McKinley has spent over a decade in Washington, protecting important political figures. He is the foremost expert in close protection detail, and with President Baldwin finishing his second term, McKinley has received high endorsements for his transition into Rainbow.

I’ve learned to read between the lines, and when it comes to Specialist Collinn "Warden" McKinley, that’s where the real story lies. His role as protector came easily to him between butting heads with his strict, hardworking father and defending his brothers at school, but it became more deeply engrained during his three tours with the Marines.

McKinley’s service with the Secret Service reads like a Washington gossip column/spy novel. During the attack on then Secretary-of-State Baldwin, the attackers used flashbangs, smoke grenades, and heavy suppressing fire to separate the protection detail. McKinley realized all their evacuation routes had been compromised and evacuated Baldwin alone. The incident clarified the reason behind McKinley’s special glasses, but it’s also become indicative of his modus operandi… his off-the-cuff attitude. He’s never been wrong and I fear he’ll rely on instinct until it finally fails him.

His access to the inner circle through the Office of the President made him the go-to in handling delicate situations. He’s clever enough to lead people on the right track without implicating himself and I suspect he knows where a few bodies are buried. McKinley has amassed quite the war chest of political favors and a reputation as a lady’s man. President Baldwin once told me that McKinley’s dalliances eclipsed that of some Presidential administrations. The First Lady was displeased with that joke.

He knows how to manipulate; he deepens his Kentucky drawl when dealing with Republican senators, and plays the Southern gentleman around women. I was amused, watching him try to play to my personality… but I play the game too.

McKinley adores his teams and he works well with others, but his connection to the Oval Office has instilled him with a sense of invulnerability. McKinley has made many enemies among politicians, businessmen, and Lobbyists; he’s a walking encyclopedia of their sins, and President Baldwin won’t be around to protect him anymore.

He is the sort of non-traditional approach we need to keep the military and law enforcement more agile and surgical, someone who understands coordination on a large scale. Unfortunately, that means I owe President Baldwin a 25-year old single malt Scotch for recommending McKinley; he’s insufferable when he’s right.