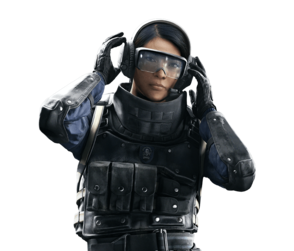 Born in the comfortable Central district of Hong Kong, Siu Mei Lin was a close protection operative before joining the Special Duties Unit (S.D.U.). With her acute reflexes and cunning CQB methods, she took the lead on several VIP and witness protection operations. Having developed an explosive short-range power and combat skills, she joined an elite security service school after graduation. Aiming to become an all-purpose operative, she traveled to a female exclusive training facility in Tel Aviv, Israel. She spent the following two years there, developing an expertise in firearms and driving maneuvers. After completing her program she returned to Hong Kong, where she ensured the protection of several high risk profiles. In 2008, she reoriented her career toward, the police force after being involved in a kidnapping situation. She was first recruited to review the processes used by the Police Tactical Force's Security Wing. During this time, her interest to lead international hostage rescue operations grew, which drove her to apply to the S.D.U.. As a Flying Tiger (S.D.U.), she uses her experience in close protection to ensure minimum casualties while leading high risk operations amidst Hong Kong's dense urban population.

Her easy-going manner allows her to blend in, making her clients and teammates feel both secure and comfortable. Shows potential signs of post-traumatic stress disorder. She admitted having flashbacks of the car crash when she rushes into high risk situations involving a number of civilians. Her extreme driving maneuvers may be a way for her to cope with stress, to assert control over those memories.

In her official report of 2004, Siu mentions a disagreement between herself and Kessikbayev, who she stated "had a complete disregard for civilian lives," which made him a "questionable asset.” According to her file, the situation was only resolved once Cohen stepped in. She later in her career also met and collaborated with Masaru "Echo" Enatsu. They were romantically involved from 2005 to 2006.