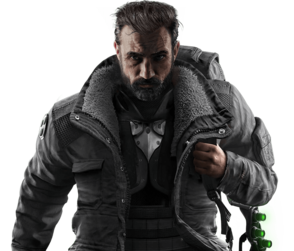 Samuel "Zero" Leo Fisher (born in Baltimore August 8, 1957) is an defending operator featured in the Operation Shadow Legacy expansion for Rainbow Six Siege. Due to the introduction of an evaluation period in Operation Shifting Tides, both Melusi and Ace are unavailable in competitive play for the duration of Operation Steel Wave. [1]

Though the CIA and Third Echelon have classified the majority of Fisher’s childhood it is known he was born in the Baltimore suburb of Towson, Maryland, where he was raised by his paternal grandmother, Sarah. He was enrolled in a Military Boarding School where he learned to focus his energy, hone his skills, and to either follow orders or be sure to hide the evidence.

From school Fisher enrolled directly in the United States Naval Academy where he majored in Political Science and later went on to pursue SEALs Training. While serving in the Persian Gulf, Bolivia, Columbia, Senegal, and Kosovo, Fisher became known for his ability to complete the mission, regardless of personal cost. After being awarded a Defense Distinguished Service Medal, Fisher spent time as an instructor at Little Creek Naval Base, Virginia.

He was recruited to the CIA, where he [REDACTED].

Although these are my first interactions and observations of Specialist Samuel Leo “Zero” Fisher, I feel that I’m finally getting a glimpse of the man behind the legend. He doesn’t brag about what he’s done or what he can do, but you can see his training in the way he moves and the critical assessment with which he evaluates his surroundings. If he were to read my evaluation, I’m sure he’d agree. […]

It’s hard to pry details from the former Echelon agent. He is focused , to the point, and makes it clear when he’s done with a subject. His mandate was never to seek out conflict, but to perform damage control before there was any evidence of a disaster. Fisher’s skills and temperament ensure that he keeps a clear head under pressure and is always prepared, regardless of circumstance. I’m interested to see if he has a leveling influence on some of our more hotheaded specialists such as Evans and Brunsmeier.

Though his sarcasm can seem abrasive to those who aren’t familiar with him – and maybe even to those who are – it hides a deep thoughtfulness and attention to detail. He can see right into the heart of an issue, or person – I look forward to his assessment and his suggestions for the improvements we can make to our training program. […]

He doesn’t want to talk about his daughter, but I feel that’s more of a warning than an indication of any residual conflict between them. [REDACTED]

Fisher is very much a solo operator, though he possesses a sense of duty to his colleagues and teammates and shows his affection through action. I’m hoping to draw him out of his shell and show him the benefits of working with the R6 Program. Based on his background as an instructor I feel he’ll appreciate more than the resources we can offer him, but also gain some satisfaction in the influence he’ll have on the R6 Program, and his teammates.

(Comment_S. Fisher: Is one of the benefits coffee, because I’m running low.)