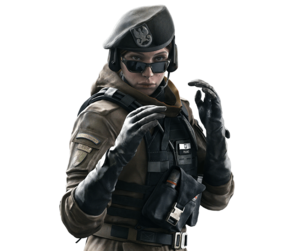 Zofia "Zofia" Bosak is an attacker operator featured in the Operation White Noise expansion for Rainbow Six Siege. She is the biological sister of the defense operator Ela.

Zofia grew up in a comfortable household in Wroclaw, Poland. When she was ten years old, her father resigned from his role as GROM Commander to become the Minister of Internal Affairs following the assassination of Poland’s president. As his eldest daughter, Zofia was the perfect vehicle for his legacy.

From a young age, she underwent her father’s strict military training, haunted by the ticking of his pocket watch that timed her to the second. While there were moments when she wanted to rebel against him, she also found comfort in the simple, black-and-white form of validation his system provided.

Her lifelong goal became reality when she passed the selection to join the GROM. Her aspiration originated from a powerful moment in her childhood, when she attended the funeral for the President of Poland. During the ceremony, she admired the solemn look the GROM Specialists conveyed, and pictured herself dressed in the iconic uniform.

During a school trip to the Masurian Lake District, Zofia was prey to a disturbing prank that almost cost her life. While she played in the lake, three boys from her class took turns trying to drown her, just for ‘fun.’ This violent experience marked her with a deep mistrust of others. The following week, she had to sit beside her assailants in class. To deal with her growing anxiety, she decided to push her training further, and ensure she could protect herself. Her father agreed to show her more ruthless techniques, given she would never question his methods.

The next morning, he led Zofia to a shooting range where he had leashed two stray dogs to a target post.

"I still remember what my father said to me that day. 'Your decisions will determine the rest of your life', he said, 'Leaders learn to make the hard ones quickly.’ He took out his pocket watch and timed me.' One of the two dogs was sick, and Zofia had to end its suffering, but which one? "My father was not teaching me right versus wrong. He was forcing me to make a decision between life and death under 2 minutes, and shoot with conviction. If I had any doubts, I’d end up injuring and torturing the dog."

It was the price to learn the skills necessary to survive any peril, and withstand dangerous situations. Her eyes locked on target, and she pulled the trigger. The heavy weight on her chest seemed to lift in that short-lived moment, as she caught a glimpse of how strong she would become.

Among Zofia’s most notable exploits was a rescue operation in Guatemala, codenamed Red Agatha. A disastrous tropical storm formed a sinkhole in the middle of the city, swallowing an entire neighbourhood. Zofia was deployed to protect a team of engineers examining the perimeter.

During a sudden landfall, she hitched a child over her back and ran as the ground disappeared from under her feet.

The kid clung to her back and she gripped the edge with her bare hands for the next half hour as she hung over the abyss. To reward her special ability to withstand hardships, Zofia received a medal and was promoted to Second Lieutenant.

Throughout her experiences, Zofia forged a second family overseas. To have more impact in the field, she learned to trust her squad mates with her life, re-considering the cruel lesson from the events at Lakeland. Far away from her father’s brutal training, Zofia let down her walls, developing close ties for the first time. She met her now-husband during a rogue operation in Mali, where they both mistook each other for hostiles.

At the peak of her career, Zofia flew back to Poland for her wedding ceremony. While she intended the event to be private, her father turned it into a marked celebration, reuniting the clique of politicians who took power after the assassination of Poland’s President. Zofia was shocked to see two former suspects among the crowd, embraced warmly by her father. She left the party early, feigning illness.

While investigating what she’d seen, Zofia discovered she was pregnant. Taking an exceptionally early maternity leave. At the family home, Zofia kept her pregnancy hidden from her father. He died in the months that followed, under suspicious circumstances.

The birth of Zofia’s daughter had a profound effect on her, igniting a need to cocoon with her family, but Ela ignored her sister’s attempts to reconnect.

Zofia returned to the GROM soon after hearing that Ela would pass the selection as a civilian. Except for her attempts to reconnect with her sister, Zofia kept her distance with everyone else. Her squadron noticed this change, and wondered if her recent obsession with her father’s pocket watch was a remnant of grief, or something more.

When Ela accepted the prestigious offer to join Team Rainbow, Zofia saw no reason to stay behind; everything about the GROM reminded Zofia of her father.

She used her contacts to reach Six personally, who agreed to meet her in Geneva. Zofia joined Team Rainbow three months later.