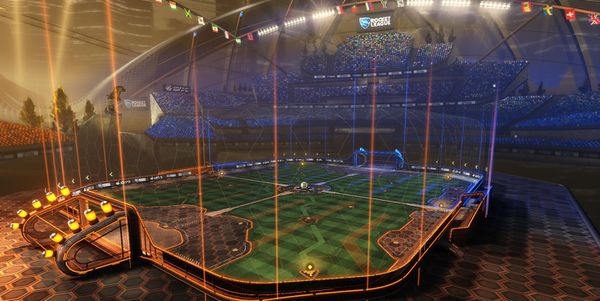 DFH Stadium is one of the arenas included with the original release of Rocket League. There are 3 variants of DFH Stadium: Day, Stormy, and Snowy. The name comes from the initials of Psyonix CEO Dave Hagewood.

The Snowy version was added on the 14th of December 2015 with the Snow Day playlist.[1] It was added to the private matches with Patch v1.11.[2]

The Stormy version was added in Patch v1.22.[3] In this patch, DFH Stadium was also added to the Rumble playlist.[3]

DFH Stadium is one of the standard maps and is thus frequently used in tournaments.

Major features of DFH Stadium in a competitive setting: