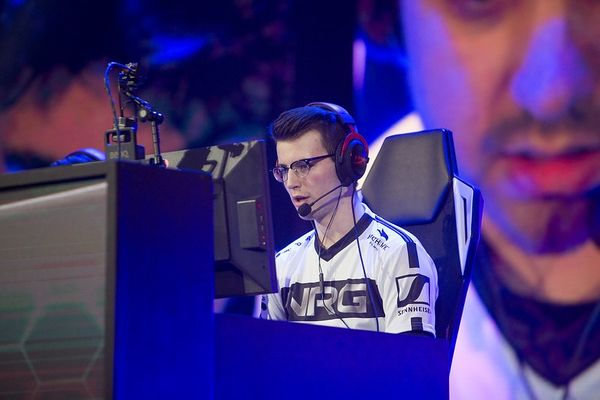 When GarrettG started playing Rocket League, he did not enjoy it in the beginning: "I actually hated the game when I first got it, but this was before I knew you could aerial and do other really cool stuff."[4] A few months later, he became really hooked and quickly climbed the in-game ranked ladder.

GarrettG's professional Rocket League career started in early 2016 when he qualified for the RLCS Season 1 North American tournament with team VexX Gaming. By the time RLCS Season 1 started, GarrettG, along with Turtle and their new addition Moses competed under the team name Exodus and made it all the way to the RLCS Season 1 Finals. Unfortunately for them, they were defeated in the Losers' Round 2 by FlipSid3 tactics and placed Top 6 in the tournament.

After a relatively successful season for Exodus, the team was ready to compete in RLCS S2, this time however, under Orbit eSports. GarrettG along with the team made it to the finals, but they lost in the first round. Nonetheless, GarrettG's performance was well enough to secure the number one spot on Rocket League's top plays for RLCS S2.

Thanks to his performance, Garrett was picked up by North American team NRG Esports. This time alongside Jacob and Fireburner in place of Sadjunior, they finished North American League Play as the number one seed. Despite performing very well in the league play and in the finals, they were not able to win the RLCS and finished third, which really motivated Garrett: "That was the best I have ever done, easily." recalls GarrettG.

After performing consistently well online and finally getting a first place finish in a LAN environment at FACEIT X Games Rocket League Invitational, NRG Esports was coming to RLCS S4 as favourites: "X Games is great and we're proud of ourselves, but now I know we really can do it, so hopefully in [RLCS] season 4 we'll make a run for it."[5] Unfortunately, NRG Esports did not live up to the expectation and finished their RLCS run in the first round after losing to the Chiefs. "After getting last at [RLCS] Season 4, I was in the was the lowest state I have ever been in my entire life. I thought that was where my time as one of the best players in North America ended."[6] Garrett, however, used this loss as motivation. It was at this time that Garrett posted the famous tweet.

Prior to RLCS Season 5, NRG Esports released Jacob and in his place came a young unproven mechanical superstar, jstn., and for the first time in RLCS history, a team was able to finish regionals undefeated. Garrett had made it to the finals for the fifth time in a row now. After defeating EU's favourite - Dignitas in the semifinals and sending them into the lower bracket, NRG's chances to win a world championship were closer than ever. Garrett along with Fireburner and jstn. have made their way to the grand finals in the upper bracket, meaning the winner of the losers' bracket (Dignitas) would have to win two Bo7 matches against them. Even though NRG Esports was not able to win the first Bo7, losing 4-1, they still had a chance. The second match was closer. Both Dignitas and NRG Esports were able to win three games, which meant the last game would determine the winner of the RLCS Season 5 World Championship. GarrettG and his teammates started out well and the championship win seemed close with the score 2-1 with about two minutes left in Game 7 of a bracket reset. Shortly after, Dignitas were able to tie the game and with four seconds left on the clock, the two-time world champion Turbopolsa scored, putting them in the lead. "At that moment – I thought it was over. I had already accepted the fact that after 12 games we had finally lost. With no time left on the clock, I couldn’t have imagined what was about to happen next."[7] With 0 seconds left on the clock, NRG Esports was able to keep the ball up and after a fortunate bounce off of the curvature of the sidewall, jstn. scored the famous 0 second redirect goal. Unfortunately even a goal like this could not achieve them the victory. After a mere 22 seconds, Turbopolsa scored the golden goal, making him now a three-time world champion.

The result of RLCS S5 was hard for NRG Esports to overcome: "That loss stuck with me for a while, I tried to act like it didn’t but in reality, I was messed up mentally for the rest of the year, getting second, I think, put a mental block in our heads, especially when it came to LAN finals with that roster going forward."[8] Garrett, however was not the only one who suffered from the loss, Fireburner even considered retiring: "... I had to convince him [Fireburner] to keep playing after Season 5."[9] says GarrettG. Coming into RLCS Season 6, NRG Esports wanted to redeem themselves. After getting a Regional Championship win and an MVP accolade for GarrettG, NRG Esports was looking strong yet again. However, they were defeated in their first match of the finals by the Chiefs and shortly after by the eventual champions Cloud9 in the lower bracket. This season was even harder for Garrett because of team issues in NRG Esports[10].

RLCS Season 7 was a repeating story for Garrett. NRG Esports won the regionals 7-0, they won the Regional Championship and secured their spot in the RLCS 7 Finals. They placed first in their group and were knocked out of the tournament by the eventual champions, Renault Vitality. For Garrett it was harder and harder, he tried seven times and he still could not win. After a team-talk, GarrettG had a talk with his teammate Fireburner: "I wasn’t 100% being serious about it, but I had told him that I didn’t know if I wanted to play anymore."[11] But Fireburner was sure. And on the 27th of June 2019, he announced his retirement from competitive Rocket League[12].

With one spot open on the NRG Esports roster, GarrettG offered the three-time world champion Turbopolsa a place to live and NRG Esports made a first ever EU to NA roster move[13]. "I’d say Turbo’s one of the few players who can play any role, really. You won’t see him hitting flip resets and stuff like that, but I feel like you can plug him into any team and they’ll play just as good or even better."[14] This was not the only change to the NRG Esports roster, however. Rogue's substitute Sizz joined NRG Esports as a coach in place of Chrome. Garrett was convinced that NRG Esports had what it takes to win RLCS since they were in the finals every single time but never won. Since RLCS S8 was the first season that coaches were allowed to be on stage with their teams to be able to communicate with the players, they acquired Sizz to better the morale. "Having Sizz is more of a mental thing for us. Just having someone like Sizz in our comms keeps us relaxed."[15] NRG Esports had proven themselves this season yet again by securing the number one spot in the regionals and winning the Regional Championship, thereby making it to the finals of RLCS Season 8. Following Fireburner's retirement, GarrettG became the only player to attend every single RLCS LAN. NRG Esports successfully defeated everyone in the group stage and proceeded to the playoffs. After convincingly defeating Spacestation Gaming in the semifinals GarrettG, jstn. and Turbopolsa found themselves in the grand finals of RLCS Season 8 against the RLCS 7 Champions - Renault Vitality. Having Turbopolsa on his side this time, Garrett felt confident: "When you have someone, who has won three times, on your team, it does not matter what they do. It is just in your mind that you can win."[16] He was not confident only in himself: "Justin is someone who does the best when he is relaxed, so honestly having Sizz next to him and Turbo next to him made him so comfortable."[17] The series started in favour of NRG Esports. The European titans, Renault Vitality, however, were catching up. After a tense sixth game, the match was tied. Garrett was once more one game away from his world championship win. Since all Game 7s in a series take place on Champions Field, GarrettG and jstn. were reminded of their RLCS Season 5 loss in overtime. Garrett, however, kept his cool, supported his teammates and made important strategical calls. First goal of the game was scored by jstn., he faked an air dribble into a demo on Scrub Killa. Vitality answered back with a goal from Scrub Killa and Fairy Peak. With the game tied, game went into overtime. Eighteen seconds into overtime, NRG Esports managed to stop Fairy Peak's attack, Turbopolsa removed Kaydop from the play with a demo, GarrettG passed a high ball to jstn. and he redirected it to the net. After 4 years and 8 seasons, Garrett became a World Champion. "When I said I wouldn’t stop until I get to lift that RLCS trophy," he said in an interview, "I worded it wrong. I’m not gonna ever retire. I’m gonna be like 40 and still play if I can. I’m gonna be chasing this feeling forever. Seven RLCS’s in a row I’ve gone home sad at the end of the day, so I’ll keep chasing this feeling."[18]