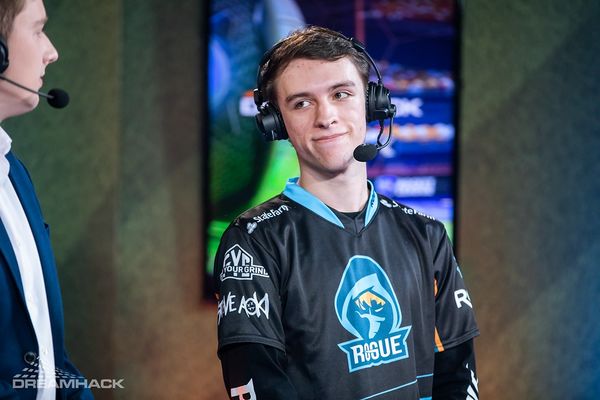 At the very beginning of Rocket League's history, Kronovi was already one of the top players, as he had been one of the best players in the prequel to Rocket League, Supersonic Acrobatic Rocket Powered Battle Cars, along with players such as kuxir97, paschy90, and M1k3Rules. Kronovi quickly became a well known figure in the Rocket League and was one of the most popular Rocket League content creators. On July 9th, 2015, Kronovi formed Cosmic Aftershock alongside Randy "Gibbs" Gibbons and Kais "Sadjunior" Zehri. The team performed well, getting consistent top 2 finishes in ESL weekly and monthly tournaments. After finishing 2nd place in the MLG Pro League - Season 1 Group Stage, the team went on to underperform at the MLG Pro League - Season 1 Finals, placing 5th-8th at the first ever Rocket League major.

Going into RLCS Season 1 the iBUYPOWER roster consisted of Kronovi, Lachinio, and Gambit. Many people considered this roster to be a "super team" and expectations for the team were high. They got 1st place in the First Qualifier and 5th place in the Second Qualifier, making the team the 3rd seed from North America going into the Season 1 Finals. In addition to having a lower seed than expected, Gambit was having health issues due to the stress of competitive Rocket League and stepped down from the team prior to the finals. As a result, their substitute 0ver Zer0 took over the 3rd position on the team. At the time, 0ver Zer0 was relatively unknown, so few people expected the team to finish very high. However, the team proved the doubters wrong with a fantastic performance. The team faced off againt FlipSid3 Tactics in the first round with iBUYPOWER coming out on top. They then went on to defeat The Flying Dutchmen and Northern Gaming to reach the Grand Finals, where they faced FlipSid3 Tactics again. After six games, iBP defeated F3 with a score of 4-2 and won the first season of RLCS.

Exactly one month after winning RLCS Season 1, on September 7th, 2016, iBUYPOWER Cosmic was picked up by G2 Esports, with Gambit returning to the team as coach.

Going into RLCS Season 2 the former champions were expected to continue with their success. However, G2 had a disappointing season, finishing 7th place in league play and not qualifying for playoffs. Due to the struggles the team had with fixing their issues during the season, Lachinio chose to leave the team. Shortly thereafter, Gambit was removed from the team. A few months later, 0ver Zer0 left the team and retired from competitive play. This left Kronovi as the only remaining member on G2 and he had to find 2 new players for the team.

Shortly before RLCS Season 3, Dillon "Rizzo" Rizzo from Take 3 and Jacob "JKnaps" Knapman from Selfless Gaming joined the G2 roster. This roster would become one of the longest standing rosters in Rocket League histroy. The season started strong for the squad, with the team finishing league play in 3rd place. However, the team lost to Denial Esports in the regional playoffs, meaning they would miss out on LAN once again.

For RLCS Season 4, the team stayed with the same roster and performed much better than the previous season, finishing League Play in 2nd place with a 6-1 record, losing only to FlyQuest. The top 2 finish locked in their spot at LAN. In the reigonal playoffs, G2 lost to Ghost Gaming and NRG Esports, making them the 4th seed going into the Season 4 Finals. The team did well, making it to the losers' semifinals after being defeated by Gale Force eSports in the upper bracket. The team lost to Cloud9 in the losers' semifinals but finished 4th place.

One month later, the team competed in the first ELEAGUE Cup, featuring the top teams from RLCS Season 4. They finished group stage with a 3-1 record, beating Ghost Gaming and Chiefs Esports Club and losing to Gale Force eSports. In the playoffs, G2 beat Mock-It eSports to make it the Finals where they faced Gale Force once again. This time, G2 was able to beat them, taking home first place for the tournament, Kronovi’s first major win since RLCS Season 1.

Going into RLCS Season 5, the team was hot off of their recent win at ELEAGUE and had a fantastic season, finishing 2nd place with a 6-1 record, losing in League Play only to NRG Esports. Their 2nd place finish secured G2 a spot at the Finals in London. However, the team wasn’t done yet. In the regional playoffs, they swept Cloud9 and then defeated NRG 4-3 in the finals, making them the 1st seed from North America. The season was especially good for Kronovi, with him being awarded Clutch Playmaker, 3rd place for regular season MVP, and Regional Championship MVP. Unfortunately, despite the team's dominant season, they significantly underperformed at the Season 5 Finals, losing to compLexity Gaming and then again to Evil Geniuses, knocking them out of the tournament without any wins.

Coming off of the previous season's disappointing LAN, the team dominated in League Play, coming in 2nd place with a 6-1 record. In the regional playoffs, the team once again faced NRG in the regional finals. They lost 4-2 to NRG, which meant they would be going into the finals as the second seed from North America. In the first round of the finals, they played against FlipSid3 Tactics, the first time Kronovi had played against kuxir97 in an RLCS match since the Grand Finals of Season 1. This match was an extremely anticipated match and after a close series, F3 beat G2 3-2 and sent them to the lower bracket where they lost 3-2 to PSG Esports, knocking them out of the tournament.

After two seasons in a row of not winning any matches at LAN, Rizzo and JKnaps made the decision to kick Kronovi, the founder and captain of the team from the G2 roster and replace him with Reed "Chicago" Wilen.

After getting kicked from G2 Esports, Kronovi joined Austin "AyyJayy" Aebi and Nicholas "Wonder" Blackerby on Rogue (previously FlyQuest) to replace PrimeThunder prior to the start of RLCS Season 7. His first major with the team was Dreamhack Leipzig, the first event in the DreamHack Pro Circuit. The team performed poorly, finishing 17th-24th, leaving lots of people asking questions about Kronovi and whether he would be able to continue to stay relevant in the scene.

Going into RLCS Season 7, a lot of eyes were on the team, especially on Kronovi, to see how they would perform. The team underperformed again, finishing league play in 6th place with a 2-5 record. However, the team was able to kick into gear during the regional playoffs, defeating Ghost Gaming and Spacestation Gaming in a commanding fashion, securing them a ticket to the finals.

Before the RLCS Season 7 Finals however, the team had another opportunity to prove themselves at Dreamhack Dallas. After such a shaky league play but strong playoff performance, there were a lot of questions about the team and how they would perform. They performed better than they had at Dreamhack Leipzig, however, they were still underperforming, finishing in 9th-12th place after being defeated by G2 Esports and mousesports on Day 2, leaving the community still questioning the team's ability.

The squad answered these questions at the RLCS Season 7 Finals. During the group stage of the finals, Rogue defeated Renegades and FC Barcelona. They then went on to defeat Triple Trouble before being swept by G2 Esports in the semifinals. Despite being swept out in the semifinals, the team performed better than anyone would have expected at the start of league play, with a 3rd-4th place finish.

After the RLCS Season 7 Finals, Rogue were considered a top team in North America, but underwhelming performances in Dreamhack Valencia and Dreamhack Montreal left fans wondering. After 3-0 losses to Pittsburgh Knights and Ghost Gaming, Rogue were underperforming once more. They moved from 0-2 to 1-3, with a 3-1 win over Birds but a 3-1 loss to G2 Esports. Week 4 came and went, but Rogue were still doing terribly. However, week 5 was incredible for Rogue, with wins over Cloud9 and NRG Esports. Despite their incredible show of form, they lost to eUnited in the regional playoffs, sending them home in 6th.

Purchases made using the retail links on this page may earn Liquipedia a small commission.
Retrieved from "https://liquipedia.net/rocketleague/index.php?title=Kronovi&oldid=1034609"
Categories:
Hidden categories: