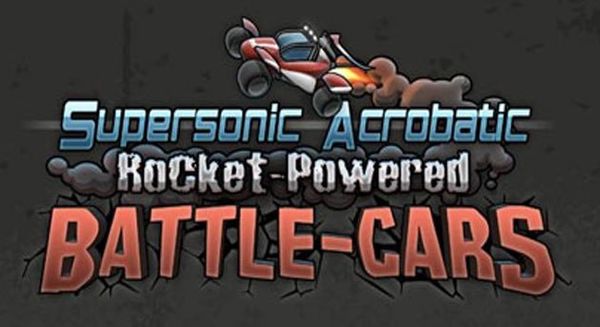 Supersonic Acrobatic Rocket-Powered Battle-Cars, officially abbreviated as SARP Battle-Cars or just SARPBC, is a Sports-Action game developed by Psyonix. It is the prequel to Rocket League and was released in North America on October 9th 2008.[1]

SARPBC was released in North America on October 9th 2008 on PlayStation 3. On February 12th 2009, it was officially released in Europe also.

Soccar is the only gamemode available in SARPBC. With team sizes from 1 to 4 players, the goal is to score against the opposition using cars to hit a ball into the opposing team's goal. Each match lasts 5 minutes of playing time. The team with the most goals after the 5 minutes have expired wins; if the teams are tied, they will play a golden goal extra time. It is possible to play this mode on all maps.

The offline mode of SARPBC contains the option of playing together with up to 3 friends by using the provided split screen. This mode also features specific bots which can be used as teammates or opponents on singleplayer as well as multiplayer mode

The online mode of SARPBC only contains a casual playlist which can be played with up to 7 other players from your continent. It is also possible to play with up to 3 friends on the same console by using the provided split screen option.

SARPBC features multiple different training packages, specifically: SCAVENGER, STRIKER, POWERSLIDE and SWEEPER. All of these packages follow a starsystem, which allows the player to collect stars and unlock the seven different cars, of which all but one of is in Rocket League. Based on how well the player performs in those specific packages, a total of 100 stars can be collected.

Most of the Control Settings in SARPBC are set and can not be changed manually, but the changeable settings are: