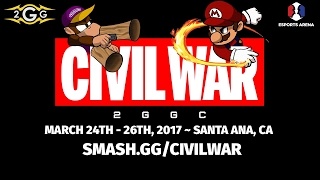 2GGC: Civil War was the third qualifier in the 2GG Championship Series, and took place on March 24-26, 2017 in Santa Ana, California. The tournament featured singles, doubles, and a crew battle event where teams of 10 led by ZeRo and Ally faced off against each other. Civil War was the most prestigious tournament in Wii U history with 47 out of the 50 ranked players on the PGR in attendance. All of Top 96 was played using a Best-of-5 ruleset.

Notably, ZeRo was defeated by Xzax and Luhtie, ultimately tying for 49th place. Similarly, MKLeo finished 65th after losing to Meteor and Ac. This tournament marks both of their lowest placements to date.