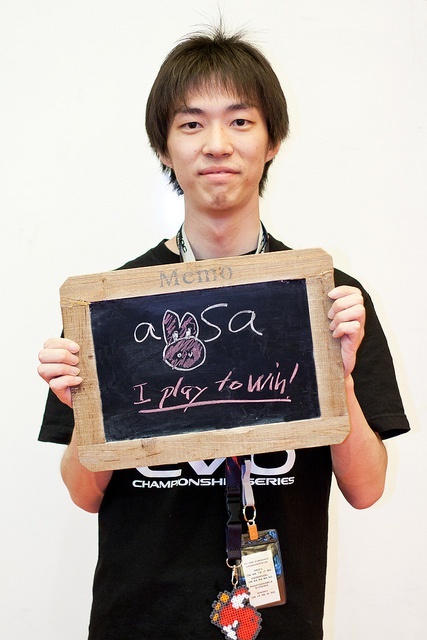 Masaya "aMSa" Chikamoto is a Yoshi player from Japan, who is considered the undisputed best Melee Yoshi main in the world. He is currently ranked 7th in MPGR 2019.

Hailing from Miyagi, Japan, aMSa is one of few top professional Yoshi mains. After taking a game off of Mew2King at EVO 2013 and placing 9th at Apex 2014, his Red Yoshi became a recognizable symbol in the competitive community. Since then, aMSa has garnered a large amount of support from the Melee community, receiving not only a crowd-funded sponsorship to go to Republic of Fighters 3 in Europe, but also a sponsorship from VGBootCamp, which was working in collaboration with the subreddit r/smashbros.[1] His high placings at large tournaments and incredibly technical Yoshi play has lead many to reconsider Yoshi's place in the current metagame as well the tier list.

Thanks to his third place finish at Republic of Fighters 3, where he lost to only Armada and Leffen while playing the PAL version of Melee where Yoshi is considered stronger, he qualified directly into the top 20 for 2014 MLG Anaheim. At Anaheim, however, he only managed to win one set against PewPewU, finishing last in his pool before being defeated by S2J in bracket for a worst-possible placing of 17th. In many of his sets at Anaheim he took the lead 2-0 before losing the next three games, leading some to believe that his opponents managed to adapt to the unfamiliar Yoshi matchup over the course of five games.[2]

Just a few weeks later at Kings of Cali 4, however, aMSa managed to defeat Mew2King while Mew2King played Sheik and Fox. However, he then proceeded to lose to Mango and Lucky 3-0, finishing 5th, eventually outplaced by Mew2King. He ended his summer in the US with a 17th place finish at EVO 2014 a week later.

In December, aMSa attended Battle Gateway 6, the Japanese qualifier for Apex 2015, the winner of which would be awarded a free flight to Apex. However, he finished 2nd behind the Peach player Shippu. Although it looked as if aMSa would be unable to attend Apex, he announced on January 21 that his boss let him to take time off work to go to the US, allowing him to enter the then-largest tournament of all time.[3]

At Apex 2015, he went undefeated until meeting Leffen (considered the best Yoshi player in the world before aMSa's entry into the scene), who defeated him 2-0. In the losers' bracket, he eliminated Zhu, Lucky (who had eliminated him 3-0 at Kings of Cali 4), SFAT, and KirbyKaze, before losing to Mango, but not before taking two games. aMSa's 5th place finish at Apex was the best-ever placing for him and his seemingly-improved Yoshi at a US national, and showed that he was still very capable despite his middling finishes the previous summer. At EVO 2015, he finished 25th, losing early in winners to Light, a relatively-unknown Peach player in what is known as one of Yoshi's worst matchups, and in losers to Hax.

Despite his great performances internationally, with victories over some of the best players in the world, aMSa has consistently lost to players in Japan that have not been nearly as successful as aMSa internationally, such as Gucci (25th at Apex 2013), Shippu (113th at Apex 2015), and Kounotori (33rd at EVO 2013). Some have speculated that this may be because Japanese players have more experience with either the Yoshi matchup or aMSa's specific style of play, as Japanese players have many more chances to play aMSa than non-Japanese players do, hinting that perhaps aMSa's international performances owe greatly to many players' unfamiliarity with the Yoshi matchup. However, aMSa himself says that he simply performs worse in Japan than he does abroad, saying "It's not Yoshi's fault, but my mental state."[4]

But 2018 would be the dawn of a new era for aMSa. He started the year with wins over SFAT and Wizzrobe at GENESIS 5, then at Smash Summit 6, he accomplished the unthinkable by defeating Hungrybox in pools. Since that time, he has maintained a new level of consistency, and has earned wins over players like Mango, Plup, and Axe, earning him a top 10 spot in the rankings for both 2018 and 2019. His best placing was at GENESIS 6, where he defeated SFAT and Ginger and 3-0'd Mango to finish 4th.