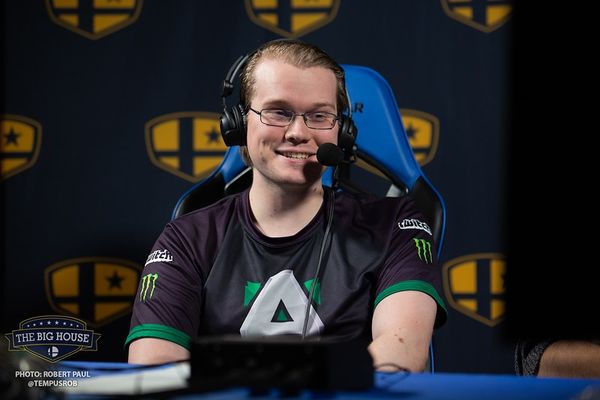 Adam "Armada" Lindgren (born March 28, 1993) is a Peach and Fox player from Gothenburg, Sweden, currently playing for Alliance. He was ranked 1st on the 2015 and 2016 Melee it on Me SSBMRankings, as well as 2nd in 2017. He was ranked 2nd in MPGR 2018. Armada is one of the most successful Smashers of all time and is regarded as one of the best players ever, being ranked 2nd on The Melee Stats All-Time Top 100. He retired from Melee singles as of September 18, 2018.[1]

Armada is not only famous for his tournament success, but also for revolutionizing Peach and taking her character to new limits. His breakout performance at Renaissance of Smash 4 in Europe where he placed fourth and only narrowly losing to Amsah, the best player in Europe at the time, was the beginning of a long era of tournament dominance in both Europe and North America.

Armada made his first appearance in the United States when he traveled to GENESIS, making his mark by placing second, defeating Mew2King in Winner's Bracket, and #1 ranked player Mango in Winner's Finals before falling to Mango in 2 sets of Grand Finals. Armada returned to the US for Pound 4, Apex 2010, and Pound V, placing highly but failing to win any of them. He finally won an American tournament when he attended GENESIS 2, avenging his loss to Mango at the original GENESIS with a 3-2 victory.

Armada is famous for his pristine tournament record since his rise to the top, most notably his incredible record in US tournaments from 2011-2013. He is currently regarded as one of the "Five Gods" of Melee. He is also known for holding a five-year winning streak against Mew2King, not losing to him in Melee singles tournaments until SKTAR 3 in 2014.

Upon his return Armada used primarily Fox in European tournaments (his Fox had rarely been seen in tournament outside of one match in GENESIS Grand Finals against Mango's Jigglypuff[3] ), which led many to believe that he would be dropping Peach in favor of Fox. However, Armada cleared up the rumor by stating it was a community misconception, and that his use and training of his Fox was to compete with top Foxes in the ditto and for possible use against Jigglypuff, and he was not dropping Peach.[4]

Armada earned the moniker "The Swedish Sniper" due to his incredible precision with projectiles.

On November 6, 2014, Armada was picked up by Swedish eSports team Alliance, as their first Smash Bros. player. [5]

After finishing 2nd at Apex 2015, using Fox for almost all of top 8, he announced on Twitter that he will be using his Fox more often than his Peach, though he will keep his Peach for certain matchups. [6]

Continuing his success from EVO 2015 Armada won every tournament he attended including The Big House 5, Eclipse and Smash Summit. It wasn't until DreamHack Winter 2015 where he finally fell to Hungrybox for second place.

Ultimately, Melee It On Me and every other voter involved in the SSBMRank from around the world ranked Armada #1, resulting in a perfect 10. He went 11-0 in sets with the top 7-10 players in the world and thus continuing his inhumane record against everyone outside the top 6 since 2010. He also went positive against every other big 6 member, sporting an overwhelmingly impressive 28-15 and thus bringing his overall set win-percentage in 2015 to 72%. Armada made Grand Finals in every 'Premier' tournament, as well as winning many majors.

Coming off his strongest year ever, Armada continued his success by winning the largest grassroots Melee tournament in history, GENESIS 3, being second to only EVO 2015 in entrants. Thus Armada became the back to back GENESIS champion and is poised for a three-peat.

Following his monumental win at GENESIS 3, Armada didn't compete in the states again until Battle of the Five Gods where he placed an unexpected 3rd - losing to both Hungrybox and Mango.

Armada went out of commission for a while, leaving Hungrybox to go on an absolute tear as he won multiple majors... leaving the question on everyone's mind: who's the best, Armada or Hungrybox? This question wouldn't be answered until Smash Summit 2 - the tournament Armada would make his return to the states. Surprisingly, Armada lost to Mew2King in winners via a shocking 3-0 result but later turned up the heat through losers and 3-0'd Mew2King in the run back, 3-0'd Mango and took two sets from Hungrybox thus winning the tournament and cementing his best in the world status.

However, it soon became clear that Armada's steam was running out and the competition was catching up. He placed an unexpected 5th at Get On My Level 2016 and narrowly lost EVO 2016 to Hungrybox and The Big House 6 to Mango - placing second at both. Although he won smaller events such as Syndicate 2016 and Heir 3 he couldn't quite win the big one. With the year coming to a close and MIOM gearing up for its panellist vote for the rankings, Armada was in a very dangerous position. Having not won a big tournament for quite some time, both Hungrybox and Mango were the favourites to win any event they entered.

It wasn't until Eclipse 2 where Armada not only rekindled his fire but also opened discussion for him reclaiming the #1 spot. He won Eclipse 2 over top talent such as Ice and Leffen, Canada Cup 2016 over Mew2King and Hungrybox and of course Smash Summit 3 - a stacked tournament with some of the best talent in the world. It wouldn't stop there though, Armada also went on to win DreamHack Winter 2016 and thus besting Hungrybox twice in the PAL version of the game.

Finally, Armada placed first in his last singles tournament of 2016, UGC Smash Open - one of the most stacked tournaments of the year. He proceeded through winners, beating Hungrybox 3-2, dropping a set to Mew2King in Grand Finals but winning set two and thus erasing any doubts that he's the best in the world.

Coming off a stellar 2016, Armada's first tournament would be GENESIS 4 - he continued through winners after an incredible comeback on S2J from being down 2-0. He went on to win the set, defeated Mango 3-1 in SF and Mew2King 3-2 which left him sitting handily in Grand Finals. Mango went on a rampage through losers, eliminating Leffen, Hungrybox and Mew2King and ultimately met Armada in Grand Finals in classic GENESIS fashion. However, Armada with a swift 3-0 quickly eliminated Mango and became the first competitor to three-peat a Super Major.

He was one of the eight players to be invited to the Super Smash Bros. Ultimate Invitational, where he tied for 4th place along with Abadango and Mango. He used Pokémon Trainer, Samus, and Kirby at the event.

Armada announced his retirement from Melee singles on September 18, 2018. This made him the first out of the Five Gods to retire, sparking a conversation if this is truly the end of the Five Gods era.

Wins over players ranked in OrionRank Ultimate: Six Months In: