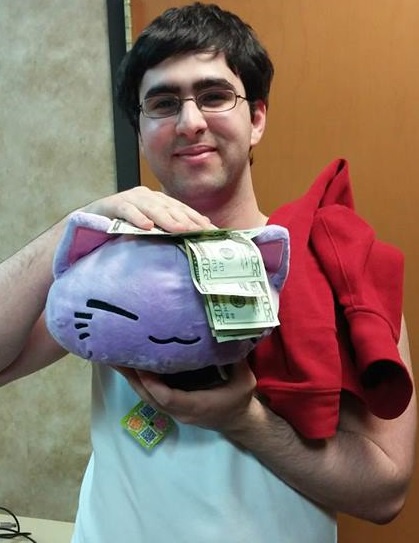 Sami "Druggedfox" Muhanna is a Fox, formerly Falco[1] and Sheik, main from Georgia. He was ranked 12th in SSBMRank 2017. Since 2017 he has taken a hiatus and has not been competing in singles.

Originally a Fox main, as his name suggests, Druggedfox has been playing Melee since 2004, but he remained mostly unknown to the community at large for most of his career. He switched from Fox to Sheik due to hand injuries.[2]

Druggedfox first came into the national spotlight when he finished in 9th-12th place at EVO 2015. After defeating Lucky to reach top 32 on the winners side, Druggedfox lost 2-1 to Leffen. In losers, he defeated S2J and Duck before falling to Mango 2–0, though he managed to take Mango down to one stock in both games.

One of Druggedfox's best performance was at Tipped Off 11. He lost 1-2 to Ice Climbers main Drunk Sloth first round of top 64. After that he went on a losers run beating stingers, Baka4moe, XIF, Ice, Gravy, The Moon, Professor Pro, Javi, n0ne and Wizzrobe twice in grand finals to take the tournament.

He has a blog called Portrait in Smash, and some of his posts have been cross-posted to the Melee It On Me website.

In late 2015, he decided to switch from maining Sheik to Falco. His Falco's first major tournament appearance was at GENESIS 3, where it placed 13th, defeating the likes of MacD and Silent Wolf, who had defeated him in multiple sets when using his Sheik. Shortly after GENESIS 3 he started to play his old main, Fox. Since GENESIS 3, he has solo mained Fox while still seeing success. His Fox has taken sets off of people such as Nintendude, S2J, Swedish Delight, Westballz, Ice, Lucky, ChuDat, SFAT, Axe, and Leffen.

Too Hot to Handle