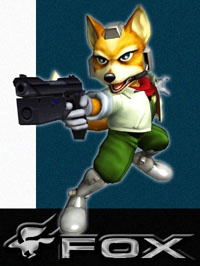 Fox is currently the highest ranked character in melee. His position can be attributed to many different factors that tend to involve his speed, maneuverability, combo/follow up potential, and reliable kill moves. He has the second fastest dashing speed, tied with Marth for the fastest walking speed, though faster walking acceleration, the fastest normal falling speed, the third fastest fast falling speed, quick and long dash-dancing, a long wavedash and fast attacks.[3]

Several reasons why Fox is ranked 1st on the tier list are his strong combo game, ability to rapidly accumulate damage, a safe approach game, and some of the fastest, strongest kill moves in the game. His fast fall speed and low, fast short hop contribute to an extremely quick SHFFL, which can let him almost effortlessly pressure and approach opponents. Additionally, Fox the proud owner of possibly melee's most notorious attack, the shine. Fox's shine is unparalleled in speed, with an active hitbox on frame one, full intangibility on frame one, and the ability to immediately jump out of it after 4 frames. His shine also has a fixed knockback which means it is a reliable combo setup at any percentage. Last but not least, his shine is a semi-spike hitting at a very shallow angle that when hit offstage sends most characters on a one way trip to the bottom blast zone. The blaster is an almost unstoppable damage-racking method, due to the projectile's long range, high speed, and ability to be combined with Fox's short hop as part of the short hop laser technique. The laser can be used simultaneously as a tool to constantly pressure the opponent with a wall of damage while having no landing lag making it near unpunishable. At the same time, a majority of Fox's attacks inflict significant damage while being very fast; his Nair, Bair, Upair, and tilts are especially notable in this regard, with all of his attacks suffering from very little ending lag.

Furthermore, Fox's vertical KO ability is one of the best in the game. With plenty of powerful vertical kill moves in his arsenal, most notably his up smash and up aerial, he can reliable kill opponents off the top anywhere onstage. Fox's shine also makes for a valuable tool for KOing. When caught without a jump most characters will die to Fox's offstage shine at as low as 0%. Marth, Captain Falcon, Falco, and peach are among the top tier characters that are almost guaranteed death when hit with a shine spike without a jump.

While not the very best, Fox's grab game is highly above average. His throws' low knockback allow him to set up potentially lethal combos. Fox's standing grab range is decidedly average, but combined with his high running speed, Fox can grab from a fairly long distance away.

Fox, however, is not invincible, and his flaws can cause significant errors in tournament play. Notably, Fox's properties of being a fast faller with low air speed and weight causes him to be among the most easily chaingrabbed and comboed characters in the game, particularly by characters such as other spacies, Marth, and Peach. Additionally, Fox can be very easy to combo if the opponent moves fast enough, which is exacerbated by his poor air speed. His light weight also causes him to die at much earlier percents than other, heavier characters, as powerful moves send him farther offstage. Interestingly, Fox and Falco are extremely light characters, both being only slightly heavier than Pikachu.

Fox also has an above average recovery; his high falling speed makes him fall far before he can recover, and his low air speed prevents him from moving closer to the edge but this is remedied when combined with his many mix ups and the long travel of his Up and Side specials. Fox's Up special Fire Fox is relatively long, but it is also linear in nature and predictable; a multitude of attacks can easily intercept it. While Fox also has the ability to recover with Fox Illusion, it too is linear and predictable in nature. Despite this, Fox has tools to mix up his recovery; momentum stalling with his shine (shine-stalling) allows him to mix up his fall speed, and his near infinite choice of angles for his Firefox can make him unpredictable when recovering close to the edge.