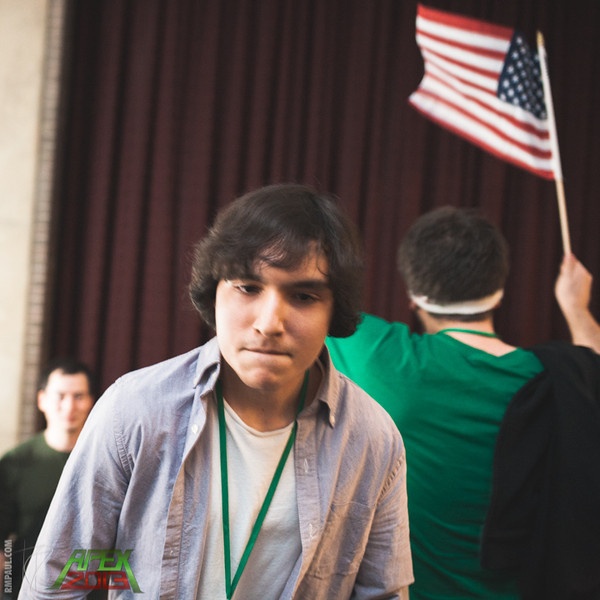 Hax is a player based in Manhattan. He started performing well at a very young age, reaching Top 8 at GENESIS when he was only 15 years old. These high placing finishes continued at multiple major tournaments across the country, including Top 8 finishes at Pound V, Apex 2012, and Apex 2013.

He was considered the best Captain Falcon player in the world after defeating Darkrain at MELEE-FC10R Legacy in 2012. After finishing 5th at The Big House 3, Hax decided that Captain Falcon was limiting him as a player, and switched to Fox. This transition led to some below average results, including a 17th place finish at Apex 2014. However, his improvement as a Fox player proved to be quite rapid, and on May 4, 2014, Hax successfully won a set against Mango in the Grand Finals of WHOBO MLG, although he was unable to repeat the feat in the second set. Similarly, Hax reset the bracket against Mew2King in the Grand Finals of Zenith 2014, but faltered in the second set. Hax's status as one of the premier Fox mains in America was cemented by his performance in the 2015 California tournament Do You Fox Wit It?. In addition to his first place finish at this event, Hax boasted an impressive 5-0 record in the Fox Round Robin exhibition, defeating other prominent players including SFAT, Lucky, and Silent Wolf.

On January 1, 2015, Hax announced that he would be taking an indefinite hiatus from Smash as a result of a hand injury.[3] He made his return to Smash after recovering from his hand surgery at Super Nebulous 3, where he took 4th. However, Hax has also struggled with severe insomnia since March 2014, which has impacted both his performance in and ability to enter tournaments.[4] As a result, his hiatus from the competitive scene will continue until this issue has been resolved. During this period, his sponsorship with VGBootCamp lapsed.[citation needed]

Hax has since been working to introduce and legalize Hitbox-style controllers to mitigate his hand problems.[5]

On June 4, 2021, Hax released 2.5 hour video titled "Evidence.zip 2", claiming that Leffen was a threat to the Melee community.[9][10] An accompanying 136 page manifesto was also released.[11][12] Public reception was mixed. Many individuals in the associated Reddit threads found the examples used to be outlandish, and voiced concern for Hax's mental health due to the radical nature of the text.[9][10] Leffen subsequently issued a statement stating that the allegations were baseless, and that he now feared for his safety at events following the release of the video and manifesto.[13] PracticalTAS summarized the contents of manifesto and concluded that the majority of claims in the document were unresaonble.[14]

On June 11, 2021, Hax privated the original video and released an edited version to address "presentational flaws".[17][18][19] Links to the manifesto were also removed at this time.[citation needed]

On June 18, 2021, Hax released a twitlonger further explaining his intentions.[20] His claims once again included that the media had "covered up the truth" and various documentaries about Leffen contained "revisionist history". Other points from the video were also reiterated.

On June 21, 2021, iBDW accused Hax of telling others about iBDW's history of being sexually abused. Furthermore, in the Discord screenshots provided by iBDW, Hax states that iBDW "faked that story".[21] Hax initially replied by doubling down on the claim that iBDW's story was fake. However, this tweet was quickly deleted.[22] Hax then responded by saying that iBDW's tweet was "highly deceptive".[23]