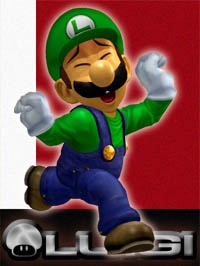 Luigi is a character in the Mario Bros. series. He is the younger brother of the more-famous Mario, but is still a prominent character (and second only to his older brother) in the series of the same name, though he is also featured in a wide number of titles, including his own title, Luigi's Mansion. Luigi is a mid-tier character, with a versatile set of moves, hampered mainly by a weak recovery. He has the longest wave dash in the game, and is also a "floaty" character.