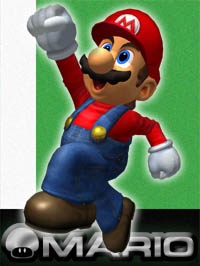 Mario is available from the start as one of the default 14 characters.

Mario is average in his weight, falling speed, air speed, size, and dash speed. His Smash Attacks do decent damage and he has a good combo game. However, most of his KOs require a setup, and he does not have any reliable finishing moves. His projectile, the Fireball, is useful in setting up approaches and edgeguarding. Mario's Up and Down Throws can chaingrab fastfallers, and his Back Throw can hit groups of opponents. His Forward Aerial is a powerful Meteor Smash, but can be difficult to land due to its startup time. Mario can wall jump and juggle opponents fairly easily. His recovery is generally poor, but his Cape can be used to greatly extend his recovery, along with its ability to turn around opponents and reflect porjectiles. His Tornado can also be used to gain altitude once in the air. His Back Throw is one of the strongest in the game, and can be used effectively to set up gimp kills.