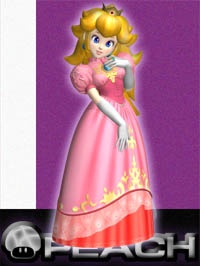 Peach is unlocked by default as one of the game's initial 14 characters. She has a unique set of techniques such as float cancelling and turnips that set her apart from other characters. Her recovery is one of the best in the game thanks to her ability to float and her up special. As a result, she is able to go far off stage in order to edgeguard her opponents. Peach also possesses a very strong down smash and forward throw.

Not everything is so nice and peachy, however. Peach's light weight and slow fall speed allows her to be KO'd at relatively low percents. For example, she is guaranteed to be KO'd by Fox's up smash at around 75% on Yoshi's Story. Peach's ground movement is also relatively slow in comparison to other characters, rendering tech chases difficult.

Unlike other characters, Peach has the unique ability to float in the air, maintaining her vertical position for about a couple of seconds. If the jump button is held, Peach will start floating at the apex of her jump. She can also float at any time during her jump animation by holding the jump button and flicking the control stick downwards. One consequence of this is that Peach can float at ground height and use aerials against grounded opponents.

If Peach uses an aerial while floating and releases the float during the attack, her landing animation will be the same as if she had performed an empty jump. This landing animation lasts only 4 frames, being shorter than both her aerials' usual landing lag (22 frames), and L-Cancelled landing lag (11 frames). Peach MUST hit the ground while the attack is still being performed for this to work however. As a result, the player is able to effectively perform another action immediately upon landing. For example, Peach can float cancel a forward aerial into a jab or grab without fear of being shield grabbed by the opponent. Another application of float cancelling is to perform an aerial immediately out of shield.

To double jump, hit the jump button twice, followed immediately by attack (while still airborne). Doing this negates the first jump, which not only allows for an immediate aerial attack, but essentially never forces her to leave the ground. L-cancelling after the aerial attack allows another double-jump L-cancel combo to be used almost immediately, making this technique particularly useful once mastered.

If peach is airborne, one can simply hit jump then attack in rapid succession for a quick aerial attack. Double-jump L-cancelling with bair to any enemies behind Peach is particularly useful, especially against Fox, Sheik, and Marth.

Peach's side special can be repeatedly used against a wall. If each side special is smashed and executed with the correct timing, Peach will slowly gain height. This technique can be used to recover on stages such as Yoshi's Story or Final Destination. Use of wall bombing to stall is banned in tournaments.

Peach's down special makes her pull a turnip from the ground. This move is special because of the fact that she can pull out 8 different kinds of turnips, with a chance to pull out 3 unrelated items: the Beam Sword, a Bob-omb, or Mr. Saturn. The more powerful the turnip is, the rarer it is to attain. The weakest and most common turnip is the normal, "smiley face" turnip, which deals 6% of damage and has the lowest knockback. You have a 59.873% chance of getting it, putting its chances to be pulled well above any other type of turnip. The strongest and most elusive turnip, on the other hand, is the Stitchface. It deals 34%, has the most knockback, and you have a 1.711% chance of pulling it. The items you can get are even harder to acquire, so their appearances are few and far between.