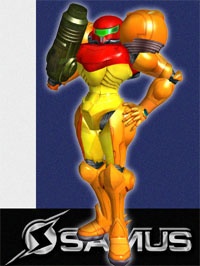 Samus is one of the 14 Melee starter characters. She currently ranks 10th on the Melee tier list.

Samus is unique in being one of the heaviest, but also floatiest characters in the game. This allows her to survive to very high percents while being difficult to combo, though she is still vulnerable to KOs off the top.

Samus's recovery is among the best, matched only by characters like Peach and Jigglypuff. She has the following recovery tools at her disposal: the bomb, the screw attack, a wall jump, and the wall grapple. The bomb allows Samus to change her momentum and improves the horizontal distance of her recovery. She can also perform a special technique known as a bomb jump: by laying two bombs in quick succession, she can let the first bomb hit her in the air. This allows a sizable increase in horizontal movement while falling less distance than if a single bomb were used. Samus's wall grapple allows her to tether to walls and pull herself up. It can also be sweetspotted by tethering directly to a ledge. Like all other z-airs in the game, it can be used out of an airdodge. By using the grappel immediately after an upwards airdodge, Samus performs a rising grapple, a maneuver which gains much more vertical height than even her up b, the screw attack. If a rising grapple is performed while Samus is facing and touching a wall, Samus will rise rapidly while in free-fall. If a rising grapple is performed at a distance from a curved wall, such as on Final Destination, her upwards momentum will break the grapple connection and Samus will rise while in tumble.

Samus has two powerful projectiles, her Charge shot and Missile. The latter has two forms: a standard version which has homing capabilities, and a smashed version, which flies in a straight trajectory with boosted power. Samus also has the longest tether grab range in the game, but it can be difficult to use effectively due to startup and ending lag, making the move very punishable if it does not connect.

Samus has a fast and long wavedash, a Super Wavedash, and can easily crouch cancel counter. She also has the lowest average landing lag from her L-cancelled aerials, as all have only 7 frames of lag. However, she has the slowest roll in the game, and has a hard time comboing most characters.