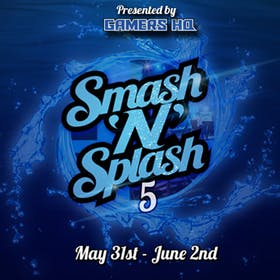 Smash 'N' Splash 5 was a tournament held at the Kalahari Resorts in Wisconsin Dells, Wisconsin on May 31-June 2, 2019. It featured singles and doubles for 64, Melee, Project M, and Ultimate. In addition to Smash, events for several other games were present at the tournament.

As the highest placing non-invited player, SFAT qualified for Smash Summit 8. However, he had to decline the invitation due to other commitments.[1] KJH, Drephen, and Shroomed all finished in 9th place, requiring a round-robin playoff to decide the recipient of the invite. Drephen took the spot with a 2-0 victory over both other players.

Smash 'N' Splash 5 was the first major/premier tiered tournament won by a solo Captain Falcon player since MOAST 3, in 2005.