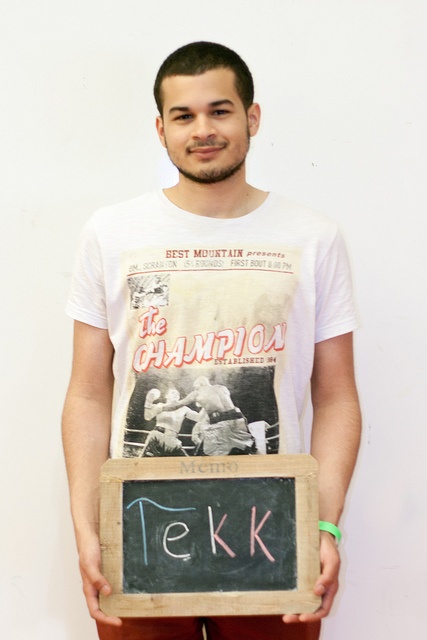 Tekk grew up in Lyon, France, and started playing Brawl when it came out. In 2009, at Tournoi du Super Lion 4, he entered the Brawl event and decided to try out Melee by participating in that event as well.[3] Later that year, he announced he had been training in Melee every day and was looking for training partners in Lyon.[4] At that time, Tekk played Fox.[5]

Afterwards, Tekk switched to Jigglypuff, but his Falcon and his Fox were prominent in 2013, when he placed 4th in the France Power Rankings, with some believing that he would eventually switch to a fastfaller.[6] He never made this switch, and still mains Jigglypuff to this day. He notably placed 4th place at DreamHack London 2015, after taking sets off of reaper, Android, and Amsah. Tekk then moved to Grenoble, another city in France about 80km from Lyon, but kept his strong ties with the Lyon community and is still considered as part of the Lyon crew — as can be attested in crew battles, for instance. [7]

In January 2016, Tekk was crowdfunded on /r/smashbros to attend GENESIS 3. On the day of the tournament, he had serious food poisoning and was unable to leave the hotel room for the weekend. Afterwards, he apologized to everyone who had donated, and stated on Twitter that he would not rely on the community again, but always go on his own or his sponsor's money so as not to disappoint again. He finished with a call to crowdfund Ice or Professor Pro instead.[8]

On December 8, 2016, Tekk announced that he was going on a hiatus,[9] and that he would compete again if he had the opportunity to study in the US.[10]