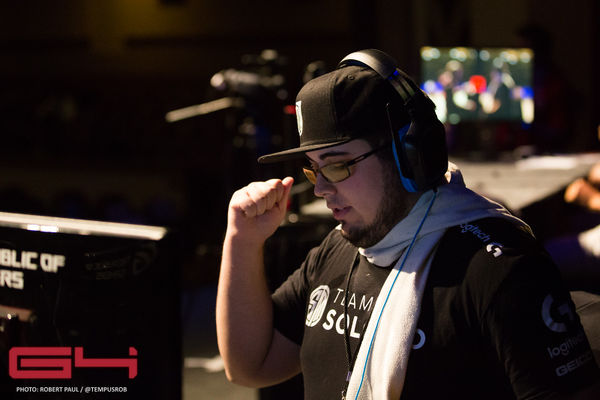 Gonzalo "ZeRo" Barrios is a Wii U Diddy Kong main from Los Angeles, California and originally from Chillán, Chile who plays for Tempo Storm. In Melee he plays Fox. While ranked 35th in the world on SSBMRank 2014, he dropped Melee in favour of Wii U when the latter was released. He is known as the best Smash 4 player of all time and is currently ranked as the best Wii U player of all time on the PGR100.

Gonzalo Barrios is originally from Chillán, Chile and frequently traveled to the United States to compete in tournaments. Originally competing and becoming one of the best at Melee in his home country of Chile, he switched to mainly competing in Brawl when traveling for US tournaments. He returned to competitive Melee after Brawl's community died down during the summer of Melee and has been frequently attending tournaments since then. He is famous for wearing a short white scarf at tournaments. He wears it as a tribute to his mother, who gave him the scarf when he left Chile.[citation needed]

ZeRo decided to focus on Super Smash Bros. for Wii U upon its release. He experienced immediate success in the game, having a 56 tournament win streak. This streak started from the game's release in November 2014 and lasted until he was defeated by Nairo at MLG World Finals 2015. This achievement was recognized in the Guinness World Records 2017 Gamer's Edition.[1] [2] Because of this, he is considered the undisputed best Smash 4 player in the world. While his dominance is no longer as absolute, ZeRo has continued to win numerous Major and Premier tournaments.

On February 19, 2015, ZeRo announced on Twitter that if he won the Wii U event at EVO 2015, he would focus on Melee exclusively for at least one year, citing Leffen as his inspiration.[3] However, despite winning EVO, ZeRo stated his intention to continue focusing on Super Smash Bros. for Wii U, as he felt that his motivation for playing Melee would not be for his fans as opposed to himself.[4]

On January 12, 2018, after being ranked 1st for the fourth time in his career, ZeRo announced that he won't be competing in Smash 4 tournaments for the near future.[5]

ZeRo was one of the players invited to the Super Smash Bros. Ultimate Invitational, which he won once again, using Mario, Sheik, and Ike.

On November 8, 2018, ZeRo announced that he would be returning to competitive Smash and will compete in future Smash Ultimate tournaments. On the same day; he also announced he would be leaving Team SoloMid and will be joining Tempo Storm.[6]

Shortly after Smash Ultimate Summit he stopped attending Smash Ultimate tournaments, as he now mainly focuses on being a Facebook Gaming streamer and uploading content to his YouTube channel.

On July 3, 2020, another accusation was issued by an anonymous source under the name of "Katie". In her statement, she covered incidents of ZeRo manipulating her, and described that he had also asked her to send him explicit pictures of herself.[9] The conversations that they had were documented in Skype logs from September 2014 to January 2015, when she was 14 and ZeRo was 19.

ZeRo responded to the accusation made by Katie later that day, acknowledging that he did talk to her on Skype during that time.[10] He said that he did not know that she was underage until she came forward and said she was 14, which he claimed was the last time that he talked to her. ZeRo did not comment on the accusations of him asking for explicit pictures until July 4, 2020, when he admitted that everything Katie had said in her statement was true.[11]

Tempo Storm severed ties with ZeRo shortly after his confession.[12]

Wins over players ranked in SSBMRank 2013: