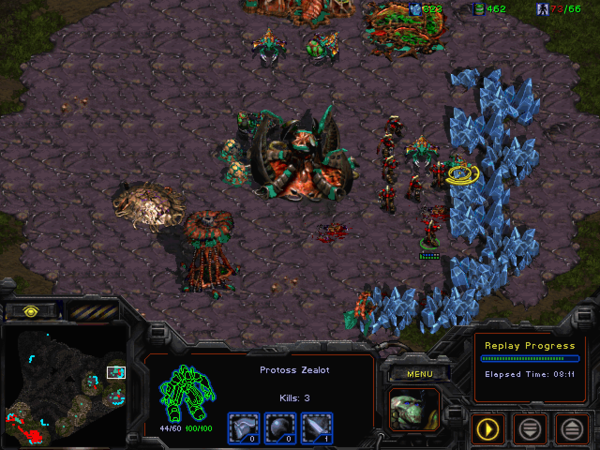 The "+1 Speedzealot" Build Order enables the Protoss to prepare a timed attack with Zealots after opening with a Fast Expansion. The timing attack is designed to hit a careless Zerg before he has units to deal with Zealots and their +1 Weapon and speed upgrades. However, in modern Protoss vs. Zerg this timing attack is anticipated by most Zerg Build Orders. Therefore, Protoss needs to judge whether or not this strategy will be blocked or not, depending on the maps and the opening of Zerg.

The "+1 Speedzealot" Build Order uses a Fast Expansion. The timing of the Build might change, depending on the scouting information. The exemplary Build uses a 14 Nexus timing.

The execution of this Build Order is straight forward. The Protoss follows the Build and tries to train as much Zealots as possible before the Speed and the +1 Ground Weapon Upgrades finish. Shortly before both finish (around 95%) the Protoss moves out and tries to attack the Zerg base. If he hits the timing correctly, the Zerg has not enough units to block the attack completely and can be overpowered in ideal scenarios. Regardless, the Protoss needs to deal a relatively big amount of damage before he either retreats or the Zealots are lost.

For the attack the Protoss can either try to take out a Zerg expansion completely, or in cases in which enough static defenses are in place, attempt a runby into the Main Base. In rare cases the entire army can be exchanged against a Hatchery or expensive tech buildings. The trade off needs to be done with care, as the Zerg will most likely be still able to counter. Any following counter should be delayed as long as possible, to buy time to adapt to the changed situation.

Depending on the damage the initial +1 Speedzealot Attack has dealt, Protoss can use different follow ups. One aims to expand safely to a third base (in addition to the Natural Expansion and Main Base), while the second option aims to gain air superiority. Both possible transitions are identical with the Basic Build until the step "@100% Leg Speed - Attack".

The expansion build is self explaining. While the Zealots try to harass or kill the Zerg, the Protoss tries to expand a second time to a third base. Ideally, the Zealots distract the Zerg until the third Nexus is up and safe. If Lurkers are used to counter the Zealot attack, Protoss should delay the expansion a bit and add Observers to his army first. Depending on the Zerg reaction, Protoss will switch to a Dragoon/Zealot/High Templar army mix.

The second possible transition, often referred to as Jangbi Variation, is a mid-game all-in. The Corsair/Dark Templar follow up try to destroy a Zerg, who did not counter with Mutalisks. If performed correctly, the Zealots will counter Hydralisks off four or five Hatches, while the Corsairs kill the Overlords. If Zerg tried to counter with Lurkers, the Overlords are still vulnerable. A following Dark Templar harassment should deal great damage to Zerg.

If Protoss misses to deal enough damage with this transition, he is in a greater disadvantage, as he can't take a third base easily.

The Build Order was a rather popular strategy before sAviOr started to reign over Protoss. He efficiently combined macro oriented openings with advanced building placement at expansion spots. The incoming speed Zealots usually hit at a time frame in which Zerg only has Zerglings without the +1 Carapace Upgrade or relatively few Hydralisks. Most 3 Hatchery openings are therefore vulnerable to this kind of timing. However, since sAviOr and other Zerg could now wall themselves in effectively, the Zealot harass could be defended without greater losses. Either Lurkers or Mutalisks could then contain the Protoss long enough for Zerg to build up a massive army or take expansions safely.

Furthermore, two Hatchery Build Orders rushing for either Lurkers or Mutalisks usually counter this strategy efficiently, as both units will be ready shortly before the Protoss can launch an attack.

The Build Order might still be used in rare scenarios as reaction to Zerg openings. In modern Protoss vs. Zerg, the Zerg usually opens with a so-called Neo Sauron Opening, expanding not only to his Natural Expansion, but also to a third base. On maps where the Zerg can't block an early Zealot attack the +1 Rush remains an option. However, the Build Order will be increasingly harder to perform the more experienced a Zerg is. It's nearly impossible to hide the underlying intention of the Build Order, as Scouting Overlords can not be chased away efficiently. The spinning Forge also indicates the +1 Ground Weapon Upgrade and thus is a clear indicator of this strategy. The lack of Corsairs are the last alarm sign for Zerg, which give away the incoming Zealots. Consequently, if this strategy is used, the Protoss has to hit his timings perfectly and deal a maximum of damage to his opponent if he hopes to win.