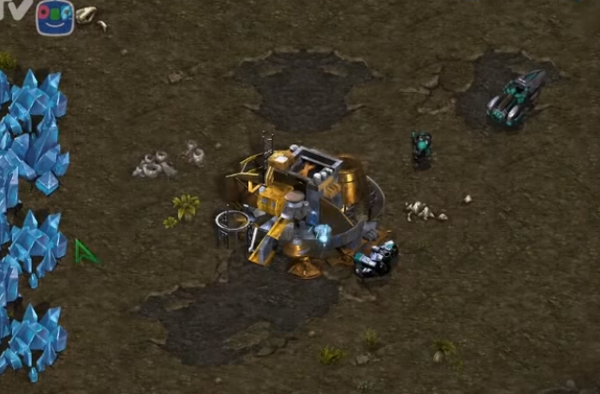 The One Factory Fast Expand opening is a safe, standard opening in Terran vs. Terran. It builds an early Factory and secures a quick expansion.

Instead of going Vulture first, a Machine Shop can be added after the Factory completes, and a Siege Tank can be built first. In this case, it is safer to build the Command Center on the high ground, and lift off to float to the low ground after it is secured with the first Siege Tank. This variant is slightly stronger against one-base play, since the early Siege Tank can hold a large number of Vultures by itself, but is weaker economically and offers no possibility of early aggression.

Anywhere from zero to three Marines can be built from the Barracks before it is lifted off to scout. It is best economically to build zero or one Marines, but building two or three is safer against all-in builds like BBS and can be used for early aggression. A few Marines combined with the early Vulture(s) can be sent to the opponent's base to apply pressure early on in the game. Leftover Marines can be used to shoot down the opposing Barracks when it is sent out to scout.

A second Vulture can be built at 24 supply. This can be used to defend against more aggressive, Marine-heavy openings, such as the aforementioned Marine-Vulture push. The second Vulture also opens up more options for early aggression. For example, the first Vulture can be used to trade for the opposing Vulture in a mirror opening, and the second can be sent in to kill SCVs as the opponent adds a Machine Shop.

Versus greedier builds such as 14 CC or Rax FE, 1 Fact FE will try to leverage their tech and early army count advantage to secure some level of map control, most commonly by researching Spider Mines first and laying them in front of the opposing base.

Against more aggressive builds such as Fact Port or 2 Fact, 1 Fact FE needs to hold on long enough that their economic advantage kicks in. Often an early Armory is added to produce Goliaths, as they are reliable all-around units in small skirmishes.