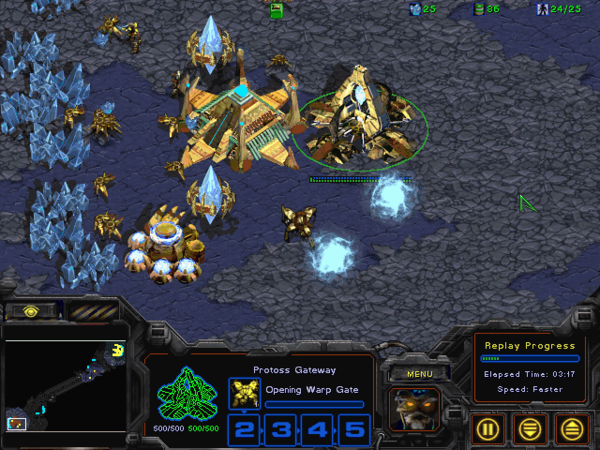 The "One Gateway Cybernetics Core" strategies refers to a longer list of the most standard openings in modern Protoss vs. Protoss. It can be adapted easily, is relatively safe against almost all other openings and offers a huge variety of mid game transitions as follow up. It should be noted, that this opening only describes different early game variations, rather than a longer plan for the overall game.

The Build Orders only vary in minor details. All are played off One Base and do not aim to take a Natural Expansion early on. Not every single possibility is noted.

The One Gateway Cybernetic Core openings are not too complicated to perform. Every of the Build Orders listed offers different timings of the first Dragoon. Depending on the gathered scouting information, the Dragoon can be trained very early or with a delayed timing. The strength of this opening lies in its safety against any other opening. Against Two Gateway Zealot openings, a second Gateway can be added, to counter a stronger Zealot attack.

Against other Cybernetic Core openings, a faster Dragoon allows for a faster technology, if the opponent does not use his Zealot(s) to harass. Vice versa, adding Zealots and delaying the Dragoon enables a Protoss to harass the opponent with the first Zealot by killing Probes or forcing the enemy to slide workers, thus losing mining time.

Any transition out of this Build Order can be used, ranging from a transition to Dark Templars, more Gateways and a Reaver tech.

The Build Order itself does not counter any opening. However, a strong Two Gateway Zealot attack like 9/9 Proxy Gateways usually hard counter this opening.

The opening scheme works on almost every map. Maps with difficult pathing like Blue Storm do not support a faster Dragoon tech.