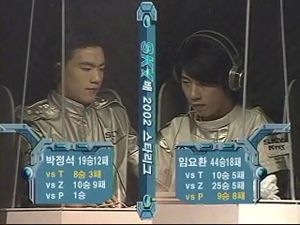 BoxeR made a strong return in the OnGameNet Starleague (OSL) (after being defeated 0-3 in the previous season) to advance 3-0 in a strong group in the Ro16, besting YellOw, TheMarine and Jinnam to go 3-0 in the Ro8 and overwhelming an on-fire Elky.

Elky, one of the few non-Koreans to participate in an OSL, attracted attention in this tournament by advancing from his group 3-0 and 2-1 in the Ro16 and Ro8 respectively. His run was finally stopped when he ran into a resurgent BoxeR, taking him down 0-3 in the semis. After this no foreigner has made it this far in an individual league.

Reach advanced into the semifinals where he triumphed against YellOw in a close 3-2. By advancing into the finals, BoxeR made his fourth OSL championship appearance. BoxeR looked to win another title, having been undefeated in this OSL so far, but was defeated by Reach 3-1, denying BoxeR of an opportunity at a third OSL title and fulfilling the Legend of the Fall.[1]

The 2002 SKY OSL used a similar format to the previous Starleagues, with group stages for both the round of sixteen and the round of eight, which led into a bracket of best of five semifinals (previous OSLs having used a best of three) and a best of five finals. Based on their performances in the previous OSL, Sync, H.O.T-Forever, Chrh and Oddysay were all seeded, while the other twelve qualified through the Dual Tournament.