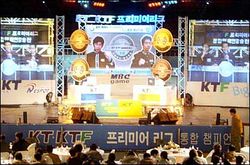 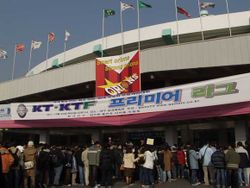 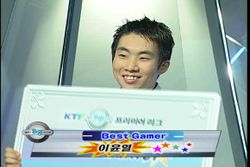 The 2003 KT KTF Premier League was held from October 05, 2003 to January 13, 2004 in South Korea. It was composed of 20 of the top players at the time the tournament was held, as selected by the KPGA (predecessor to the KeSPA). The tournament series was sponsored and created by KT KTF, a South Korean telecommunication company, as a complement to the OGN Starleague (OSL) and MBCGame StarCraft League (MSL).[1]

The KT KTF Premier League distributed to 20 players across two separate leagues, the KT Bigi Premier League, which was broadcast on GameTV, and the KTF MegaPass Nestop Premier League, which was broadcast on MBCGame. Matches were generally played on a weekly basis on each of the two gaming networks, with participants competing against both those in their own and their counterpart leagues. The top finishers, one from each league, then advanced to a playoff format competition to crown the grand champion.

The tournament was the first of the series and was followed by the 2004 KT KTF Premier League.

The prize pool distribution was as follows:

+: These players were rewarded additional bonuses for playoff victories, but their exact amounts are not clear.

The Group Stage enabled the top three finishers to advance to the Elimination Stage.[7][8][9][10] The Group Stage was composed of a series of 1v1 round-robin matches within each league (KT Bigi and KTF MegaPass Nespot), in addition to interleague play between the two leagues, with participants competing against players in the other league.[11][12][13]

Participants from each of the two leagues competed against players in the opposing league during this phase of the Group Stage. Each participant generally played two games against members of the counterpart league.

The cumulative Group Stage records, totaling the individual league and interleague results, were:

The top three finishers in each league advanced to the Elimination Stage.

The championship match brought together the winners of each respective league. With players largely competing against members of their own league, this was the first time the two finalists,

BoxeR, faced each other in the KT KTF Premier League.

BoxeR to win the tournament in four games in the finals.