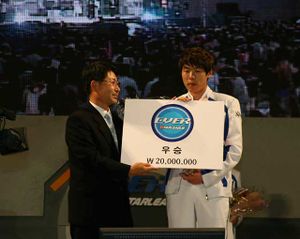 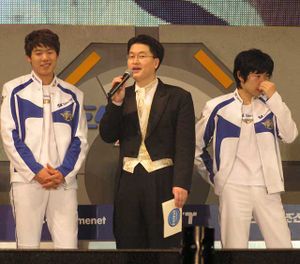 BoxeR in tears after defeat

Perhaps one of the most notable series of the 2004 EVER OSL was the semifinals between BoxeR and his rival YellOw. The Bo5 turned out to be very short as BoxeR proceeded to bunker rush YellOw three matches straight, winning 3-0. YellOw then played against Reach for the bronze medal but lost 2-3.[1]

The finals of the 2004 EVER OSL was perhaps one of the most anticipated in StarCraft history, with BoxeR facing his pupil iloveoov. Not only did the teacher face his pupil, but the match-up was also fought between two Terran players with completely different styles of play: BoxeR's micro intensive play against iloveoov's macro focused style.

The finals was brought to a fifth and deciding game after BoxeR and iloveoov won two games each. In the end, iloveoov came out victorious and BoxeR placed second in an OSL for the third time in his career.

After the finals BoxeR broke down in tears.

"I really hope that now BoxeR will never hear from someone else that he is weak. I wish that BoxeR will win all of his future tournaments the same way he stepped past so many good players on his road to this EVER Starleague Final. I'm sure he was so determined because he hasn't had a win recently... I'm so sad. From now on, although I want to game again with BoxeR, I don't want to meet him in this kind of situation ever again. If I had beat someone other than Boxer, I think I would have been much happier."[6]