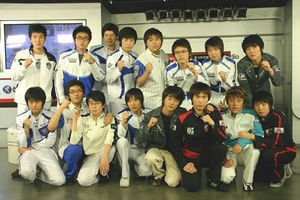 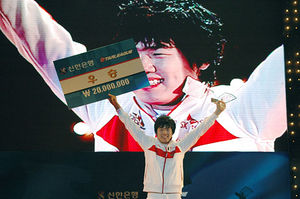 The 2005 Shinhan OSL has held from December 2005 through March 2006. The tournament marked the first of the four OnGameNet Starleague (OSL) tournaments sponsored by Shinhan Bank. Coming into this OSL, Zergs had been dominating the MSLs while July had been tearing through OSLs, but only three Zergs would qualify for the 2005 Shinhan OSL. Anytime had just won the previous title at the 2005 So1 OSL, with BoxeR taking another silver.

Heading into the Round of 16, Group A was marked the group of death, with Anytime, XellOs and Pusan, while BoxeR, July, and iloveoov were placed in groups consisting of midlevel players and rookies. In an upset, Casy made it through the group stage by eking out one of his rare TvP wins against Anytime, eliminating the defending champion from the tournament. Meanwhile, everything else goes according to plan with the rest of the star players advancing. iloveoov won a close duel with BoxeR in the Round of 8; their first meeting since the 2004 EVER OSL finals. In the semifinals, Casy showed his TvT prowess, but was narrowly defeated by iloveoov 2-3. The finals was set to be one for the history books with rivals, and respective racial powerhouses, in iloveoov and July facing off. It would, however, to be a lopsided affair with iloveoov sweeping July 3-0, the same score July had endured at the 2004 IOPS OSL one year earlier.[1]

The preliminary group round was played using a four-person round robin format with best of one matches. The top eight finishers then competed in a single elimination bracket where the quarterfinal round was a best of three format while the best of five format was used for both the semifinals and finals.