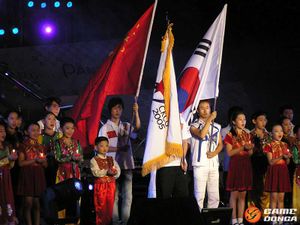 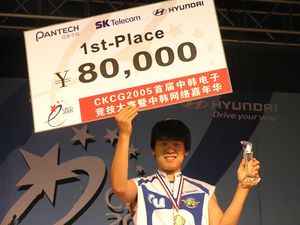 The 2005 CKCG, or China Korea Cyber Games was held from August 19-22, 2005 in Bejing, China.[1] It was composed of 16 invited players, eight from each country, with the Korean players coming from Pantech EX and SK Telecom T1, as the two sponsoring teams.[2] Alongside the individual StarCraft competition, an amateur 2v2 division was also held, as were Warcraft III and Counter-Strike.[3][4]

The tournament was the first in a series of collaborative tournaments between the two nations.

The press detailed some unfortunate some difficulties the participants faced in terms of sub-optimal playing environment and accommodations.[5]

The Group Stage enabled the top eight finishers to advanced to the Elimination Stage:[7][8][9][10]

Goodfriend
August 21, 2005
Lost Temple
Into the Darkness 2
Luna the Final

WE.Super
August 21, 2005
Lost Temple
Into the Darkness 2
Luna the Final

NaDa
August 22, 2005
Lost Temple
Into the Darkness 2
Luna the Final

NaDa to win the tournament in three games in the finals.

- A number of 1v1 and 2v2 matches were broadcast on MBCGame