With BoxeR departing for military service, CJ Media organized the first SuperFight to provide the fans an opportunity to bid him farewell. The show-match pitted the Emperor of Terran against two prominent Zerg players: sAviOr, the strongest Zerg player of that era in 2006, and YellOw, BoxeR's long-time rival.

*BoxeR would have been awarded a ₩2,000,000 bonus had he won both matches in SuperFight 1 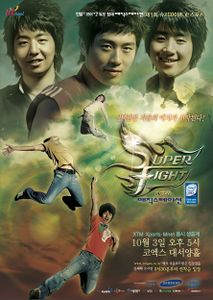 Both matches were best of five format.